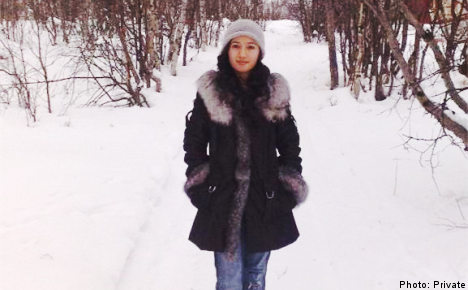 Afghan student Terina Asadi takes a stroll in the snow.

When Freiweni sets off to work in the morning it’s still dark outside. The temperature shows minus fifteen Celsius. “Life in Sweden is very different to Eritrea,” the single mother of two tells The Local.

Freiweni Ghiedei Ghebregzizberher, 51, has been living in Kiruna for the past three years. Leaving her war-torn East African homeland behind, Freiweni and her children arrived in Stockholm in 2007. Soon they were transferred to the refugee facility in Kiruna, a town located some 250 km north of the Arctic Circle and famous for its ice hotel and endless summer days.

But basking beneath the midnight sun was not on the cards when Freiweni first arrived in Sweden.

“It was winter and my children complained. They would ask: ‘Mum, why did we have to come here? It’s so cold’,” Freiweni says.

She admits to feeling scared at the time. “On our way to Kiruna I had no idea where we were going, my kids were crying and it was very traumatic. It hurts to think about it.”

The family spent a year at the refugee facility, where they received, among other things, financial assistance that enabled them to buy warm clothes and shoes.

“We had not been prepared for the cold and had arrived in very thin clothes,” Freiweni remembers.

Having received a residence permit in 2008, the family moved from downtown Kiruna to Vittangi, a village of just 800 people.

“There were no apartments in the centre. I felt sad about it at first but now I think it’s the best thing that could have happened. The people in my village are so nice,” she says.

After two years of Swedish studies combined with a work placement scheme, Freiweni has now landed her first job.

“I’m so, so happy.” Her days are long and the job at the old people’s home requires some travelling. “I get up at 6 o’clock every morning, taking the bus in to Kiruna,” she says. “But I don’t mind at all, I’m just so glad to be working.”

It took Freiweni and her children about a month to get used to the cold in Kiruna and today she is grateful for ending up so far north:

“I wouldn’t like to live anywhere else. I love the little village we live in. My children don’t want to move either. It’s safe here. There were so many problems in Eritrea, with bombs falling and all. Now I have the chance to give me children a good upbringing.”

22-year old Terina Asadi, originally from Afghanistan, is another newcomer who is happy to be living in the very north of Sweden. She arrived from Turkmenistan in February last year and already speaks Swedish fluently.

“People are so nice here, and very talkative. I practise my Swedish on the bus,” she says.

Terina spends her days taking courses at the municipal adult education centre (Komvux) in order to continue the medical studies she started at a university in Turkmenistan.

“The only bad thing about Sweden is that my qualifications don’t count,” she says. “I have to start all over again.”

Terina regrets that she will have to leave the area one day: “Unfortunately I have to move from Kiruna later as there is no university here. It’s a shame because I love the snow and the summer here is even better. It never gets dark; it’s amazing.”

New figures from the Swedish Migration Board show there are currently 35,000 asylum seekers living in Sweden. Spokesman Johan Rahm says they are not expecting an increase from last year, but adds: “It is always hard to tell as you don’t know how things will develop in conflict zones around the world.”

The municipality of Kiruna currently plays host to around 500 asylum seekers, but less than ten percent are likely to stay.

“The ones who do get a residence permit are most likely to move down south,” says Maud Lantto, head of the board’s refugee reception division in Kiruna.

But she does not think the cold climate is a decisive factor:

“The people who come here seem to like Kiruna a lot, but many have friends and family in other parts of the country. Also, there is a huge lack of apartments in the town and many people don’t want to live in the small villages.”

What’s more, unemployment is on the rise in the area. “The recession has reached Kiruna,” Lantto confirms.

Kiruna first set aside temporary housing for asylum seekers in 2001 and Lantto admits some citizens were cautious at the outset. “There were a few protests about having a refugee facility in the area, but I rarely hear complaints these days.”

“In my opinion, meeting people from other countries can broaden your horizons and give you a new perspective on life. And from what I can see, it seems people are becoming more understanding about why people leave their countries in the first place.”