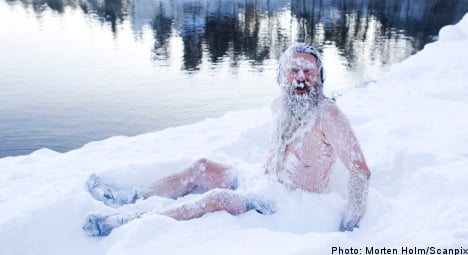 Trygve Bauge has a roll in the snow in Asker, Norway, December 28th 2009

Meteorological agency SMHI forecasts snow in all parts of Sweden on Wednesday, with a combination of strong southwesterly winds and heavy snowfall also leading to an increased risk for the formation of snowdrifts.

“We can expect a major shift in the weather, beginning with snow and wind in mountainous areas tomorrow afternoon,” said meteorologist Emma Grönkvist in a forecast published on SMHI’s website.

Temperatures are expected to range from just above zero in the south to around -5 degrees Celsius in the north on Wednesday before dropping further as the weekend approaches.

“Snow will continue to affect large parts of the country on Thursday,” said Grönkvist.

Friday will see a weakening in the low pressure belt. Snowfalls will be restricted to central parts, with most of the rest of the country experiencing cloud cover.

“It will remain cloudy in many areas at the weekend, with continued light snow falls along the east coast,” said Grönkvist.