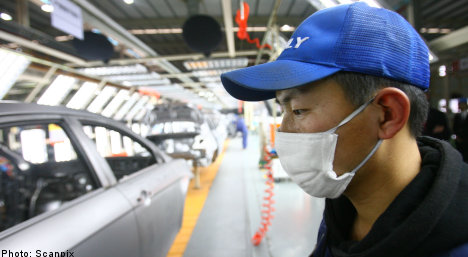 Geely said it plans to make Volvo profitable by 2011 by producing large numbers of cars at a factory in Beijing, but still wants to keep Volvo Cars’ production facilities, head office, and development division in Sweden.

The plans are contained in a document which Geely has handed over to Chinese authorities who must approve the deal, the Reuters news agency reports.

The Chinese automaker expects to complete an initial agreement to buy Volvo Cars from Ford in February, and to have the deal finalized by May.

The price is expected to be between $1.5 and 2 billion, according to Reuters.

The document given to Chinese authorities includes plans for Geely to build a new factory near Beijing with the capacity to produce 300,000 Volvo-branded vehicles a year.

While Geely wants to keep the “core value” of Volvo’s brand unchanged, it will seek to improve it “with the development in emerging markets” and by adding “fashionable, dynamic and passionate international elements”.

On Tuesday afternoon, a group of representatives from four different unions from Volvo Cars in Gothenburg, as well as a compensation consultant, departed for Shanghai.

“We hope to get answers to a lot of questions they haven’t answered yet, like how the financing looks for operating Volvo into the future. And we also want a promise that development and manufacturing will remain in Gothenburg,” Mikael Sällström, chair of Volvo’s IF Metall chapter, told the TT news agency.

Unions have previously expressed their concerns about Geely as Volvo’s new owner, both due to fears about jobs moving to China and because of the risk that suppliers may restrict Volvo’s access to the latest technology due to fears that it will be copied