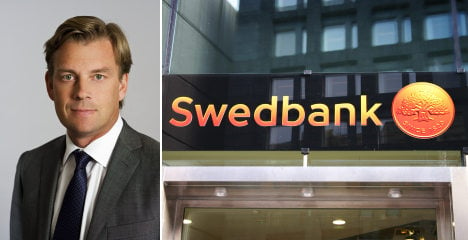 The bank announced on Tuesday that its board had decided to “cancel variable remuneration for 2009” in cases where employment contracts give it “a discretionary right” to make such decisions.

“This is a unique decision in the light of the bank’s losses and government efforts, and should not be interpreted as a signal that we have changed our view regarding the basic principles for the bank’s remuneration system,” Swedbank CEO Michael Wolf said in a statement.

“There is still a strong consensus that a system combining fixed and variable remuneration is the most efficient system to create value for customers and shareholders in the long term. However, going forward we will emphasize the long-term component of the total remuneration.”

The move means that the 406 million kronor ($55.5 million) set aside for bonus payments up until the third quarter of 2009 will be returned, bringing Swedbank’s variable compensation payments for the year down to 17 million kronor.

Swedish finance minister Anders Borg has long been critical of what he saw as excessive bonus payments in light of lower profits at banks in the wake of the financial crisis.

Earlier in January he accused banks of ignoring a new set of rules governing bonus payments recently drawn up by the Swedish Financial Supervisory Authority (Finansinspektionen – FI), and threatened to explore even stricter rules if banks didn’t change their behaviour.

“The fact that they (the banks) aren’t hearing these signals which have been very clear is a provocation,” Borg told the TT news agency earlier in January.

“At first glance it might seem a simple decision to cancel variable remuneration during a year when the bank is reporting substantial loan loss provisions. But our mission is to protect the shareholders’ investment and to safeguard the bank’s competitiveness, both in the short-term and the long-term perspective”, Stålberg said in a statement.

The announcement is intended to aid Sweden in its post-coronavirus economic recovery. Photo: Pontus Lundahl/TT

The key interest rate, the repo rate, will remain unchanged at zero in order to help keep interest rates to both households and businesses low and to support Sweden's economic recovery.

While the central bank, the Riksbank, said it expected the rate to remain at zero for three years, it also noted that it could be cut if necessary.

“The Swedish economy seems to have left the acute crisis situation of the spring and started to recover slightly faster than expected. But it is still a long way back [to the pre-crisis situation], and the situation on the labour market is worrying, with high unemployment as a result of the sharp decline in economic activity in the spring,” said a statement from the central bank on Tuesday.

The bank took the landmark decision to slash the rate below zero in February 2015, hoping that the strategy would boost inflation to raise the price of everyday goods and services which had been stagnant in recent years, and therefore improve the Nordic nation's economic prospects. Almost five years later, it was raised from -0.25 to zero in December 2019, following almost two years of inflation being close to its target of two percent.

In its statement on Tuesday, the bank said inflation had been higher than expected in recent months, but was still forecast to be low overall for 2020. Sweden was already heading towards an economic slowdown even before the coronavirus pandemic, and the crisis has affected the global economy with an impact on Sweden.

“In light of the severity of the crisis and the fact that demand will not be back at more normal levels any time soon, it is expected to take time before inflation is more permanently back close to the Riksbank's target of 2 per cent,” the statement said.

The new forecasts also included a predicted fall in GDP of 3.6 percent this year, which is less dramatic than the predicted drop of 4.5 percent in the previous forecast.

And growth in 2021 was expected to reach 3.7 percent, up slightly from the previous forecast of 3.6 percent.

You can read the full report from the Riksbank here.