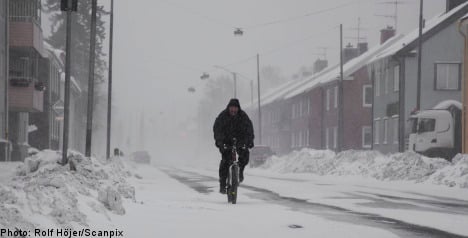 A pileup at 3pm held up traffic on the E4 motorway near Ljungby in southern Sweden. Emergency workers said nobody was seriously injured after a truck’s trailer slid across the road, blocking off southbound traffic and leading to a multi-vehicle collision.

Speed limits on the Öresund Bridge between Sweden and Denmark have been reduced to 70 kilometres per hour, while motorists driving light vehicles have been advised against crossing the bridge. The restrictions are expected to remain in place until 2am on Thursday.

Emergency services in Halmstad in western Sweden took the precaution of evacuating a preschool as fears mounted that a 55 metre municipally owned chimney risked falling onto the school building.

Peder Hörup, a project manager for Halmstad’s energy and environmental service, said the chimney is part of a heating station and is awaiting demolition as a result of a known construction defect.

“Following consultation with the emergency services we decided to seal off the surrounding area purely as a precaution. We can’t allow something to happen,” he told news agency TT.

“It’s going to continue for most of the day,” said Anna Österman at meteorological agency SMHI.

“It’s going to snow again tomorrow but by then it will be more sporadic,” she added.