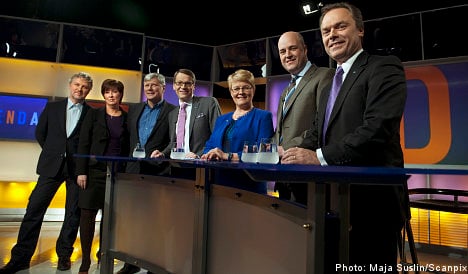 “The well-off can expect to have their taxes raised. Our proposal affects those earning more than 30,000 kronor ($4,000) per month,” Green Party spokesperson Peter Eriksson confirmed during the Sveriges Television debate.

But coalition partners the Left Party were unwilling to give a clear signal to voters on taxes.

“We will give confirmation in April. I do not want to discuss taxes without discussing welfare,” party leader Lars Ohly said.

“We have confirmed our position on property taxes. Those living in the most expensive homes will pay more and those living in cheaper houses and apartments will pay less,” she said.

“Our tax cuts will be aimed primarily at pensioners.”

Moderate party leader Fredrik Reinfeldt repeated the party’s pledge to proceed with tax cuts for average income earners. But the government parties were not able to confirm concrete plans for the forthcoming mandate period.

Peter Eriksson maintained that 100,000 people had been added to the ranks of the unemployed during the centre-right government’s tenure, a claim rejected by Fredrik Reinfeldt.

“The statistics show that we have 100,000 more in work, despite a deep financial crisis and recession. This is as a result of a consistent employment policy, but we are not satisfied,” responded Fredrik Reinfeldt, who added that the government had acted to protect welfare services despite the crisis.

Reinfeldt cited international studies which he argued confirmed Sweden’s resilience during the downturn.

“Increased employability and lower costs is our answer – what is your response?” he challenged.

“We have a policy, climate investments, home-building and saving jobs, at the core of the welfare state,” Mona Sahlin replied.

Nuclear power and divisions within the Centre Party kicked off the debate, the first of the election year.

While it emerged that four Centre Party members opposed the government’s energy agreement, party leader Maud Olofsson assured viewers that the parliament would adopt the proposal.

“There was one who voted against, the rest of the (parliamentary) group were in favour. It is the long term approach that is important,” she said.

Olofsson also responded to a question as to why the far-right Sweden Democrats now enjoy more support in recent opinion polls than the Centre and Christian Democrat parties.

The recent controversy over the merits of a legal ban on the wearing of a burqa or niqab in public places was touched on during the SVT debate.

Fredrik Reinfeldt played down the significance of the debate but underlined that it was important to send a clear signal to young women in Sweden that they should not be obliged to hide their faces.

“I am prepared to back them on their decisions,” Reinfeldt said. The prime minister has previously ruled out legislation to ban the Muslim dress.