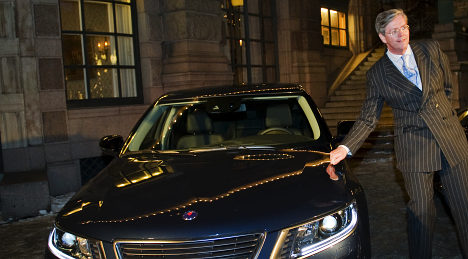 According to the terms of the deal, Dutch sports car firm Spyker will hand over 540 million kronor ($74 million) in cash to GM to complete the deal. The first $50 million is due immediately and the outstanding amount is due to be handed over on July 15th 2010.

It is this second instalment that is the subject of intense speculation and Victor Muller told the newspaper that he is reluctant to reveal the identities of the investors he claims are interested in the deal, on a point of principle.

“They want to be anonymous for the reason that they do not want to be public people,” Muller told the newspaper.

A company press release issued on Monday detailing the financing behind the purchase of the Swedish car maker does little to shed light on the deal:

“Spyker has been approached by various investors to fund this instalment. Spyker intends to finance this amount primarily through senior debt (senior to the debt owed to Tenaci), but does not rule out other alternatives.”

The Local reported on Saturday that a Swedish government investigation into the dealings of the Russian Antonov family, who retain an interest in the form of outstanding loans and ordinary shares in Spyker, had caused the FBI to order GM to pull out of the deal in December.

Muller was unable to confirm to SvD the nature of the Antonovs’ existing involvement in Spyker or the Saab deal.

“I do not want to go into this on principal. I am reluctant to talk about them,” Muller said, adding that the Antonovs’ alleged links to organized crime were “just rumours, there is no proof that it is true.”

In Spyker’s Monday press release, Muller explains that Vladimir Antonov’s current shareholding of 4.6 million ordinary shares in Spyker has been bought by Tenaci – a holding firm directly owned by Victor Muller, “subject to closing of the Saab acquisition.”

Furthermore, according to the newspaper, Spyker is groaning under a mountain of debt to the Antonov group and their bankers, much of it resembling text message loans with crippling interest rates in excess of 10 percent, several of which have already fallen due.

This debt, amounting to 580 million kronor, will remain on Spyker’s books even after the completion of the Saab purchase, and of Antonov’s share holding, but will simply be written over to Victor Muller – at the same high rates of interest, SvD writes.

All of these transactions are to be funded by loans secured by Victor Muller and/or companies controlled directly by him.

“We have a lot of alternatives to see where we can secure the money, we have six months to sort it out,” Muller told SvD.

“Spyker finances its own deals and Saab shall finance its own deals. So no money will be transferred from the one to the other,” Muller claimed in response to a question as to whether Saab’s purported 1 billion kronor cash reserves will in some way be drawn into the financing of the takeover.