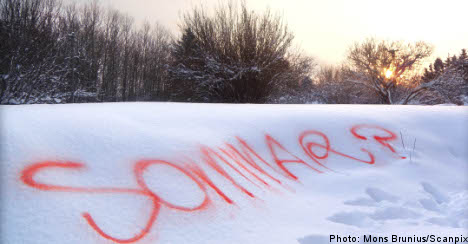 “The weather is still bad but we now have braking levels that the airlines are able to accept. It’s up to the pilot to decide whether it is possible to take off or land the airplane,” she told news agency TT.

In all, 350 passengers have been hit by cancellations, with around 1,000 more affected by delays at Skavsta, located 100 kilometres south of Stockholm.

Passengers with cancelled flights have instead been booked onto the next available flight, but not all can expect to get out of the country on Wednesday.

“It hasn’t been much fun but safety always has to come first,” said Gade Kulovuori.

Amid heavy snow falls and strong winds, there had been no traffic in or out of the airport since Tuesday evening. A handful of planes were redirected to Arlanda and Västerås airports but the majority of flights were subject to postponements.

Budget carrier Ryanair, which has its main Swedish hub at Skavsta, cancelled some of its flights on Wednesday morning.

“It’s starting to get quite full here,” said Gade Kulovuori during the morning.

In the departure hall at Skavsta, passenger Christian Nyberg learned that his delayed 9.40am flight to Milan had been cancelled.

“It doesn’t feel good. We’ve booked a rental car and a hotel and were heading down to ski for the weekend,” he said.

The atmosphere at the airport was somewhat chaotic, he said, with a number of passengers waiting for updates on the status of their flights.

“At the same time, there’s not much one can do about the weather,” he said.

The snow has also led to the closure of a number of rural schools in Värmland in western Sweden as snow drifts on the roads prevent school buses from completing their routes.

Säffle council in southwest Värmland has announced the cancellation of lessons at six schools in the municipality. The schools do however have staff on hand to take care of any pupils who manage to defy the elements.

With more heavy snow forecast for southern areas of Sweden, hard-hit commuters are in for more disruption as the government and opposition fight to apportion the blame.

Thousands of commuters have been hampered by delays and cancelled trains as a result of recent adverse wintry weather in the southern areas of the country in recent days.

The Swedish Met Office (SMHI) has issued a class 1 storm warning — the lowest warning level on a scale of 1-3 — for the Götaland region, forecasting a further day of heavy snow falls and falling temperatures. A spate of accidents and further disruption to train services is to be expected, SMHI warns.

The infrastructure minister Åsa Torstensson argues that the situation is unacceptable.

“The trains are supposed to run even when it snows. This is a long winter, but then it is usually wintry in several areas of the country so this is nothing exceptional,” she said.

“I think therefore that as a passenger you should be able to expect that the trains run on time.”

Torstensson argues that years of under-investment during the the tenure of the previous government is to blame.

“There has been a lack of funds for maintenance over a long period of time. This is because the budget has not prioritized the provision of necessary resources to the Rail Authority (Banverket).”

With train services set to continue to run on a limited schedule until at least Friday, rush hour commuters can expect to find standing room only on many services into Stockholm.

The Social Democrats meanwhile rejected Torstensson’s apportioning of the blame.

“We have invested large sums of money on maintenance and if you factor in inflation the difference is not so great,” the party’s infrastructure spokesperson Lena Hallengren said.

Electricity utilities Eon and Vattenfall report that they have raised their state of alert after SMHI’s storm warning to tackle any eventual power failures.

Eon has put a further 60-70 staff on alert as well as deployed helicopters to keep a check on power lines.

The Roads Authority (Vägverket) also has its staff on alert in primarily the southern areas of Sweden with over 1,200 snow ploughs and other vehicles ready to roll out and clear the roads.

The harsh wintry weather led to all train services between Malmö and Copenhagen being suspended at around 5pm on Tuesday with passengers instead referred to replacement bus services.

Sten Laurin at SMHI forecasts that the low pressure front that brought the snow in over Skåne on Tuesday evening is set to remain until late Wednesday afternoon before pushing east.