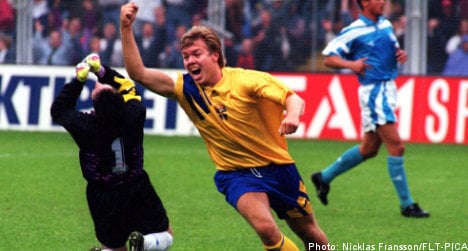 Brolin claimed that in a match against Norway in 1991 he in fact scored the 1-1 equaliser and not, as the records show, former Sheffield Wednesday and Coventry full back Roland Nilsson.

“He shot at my back, it changed the direction of the ball and tricked the goalkeeper. You can see that my team mates came over to congratulate me,” Brolin said.

Tomas Brolin argued that it was no secret that he and the Swedish media did not see eye to eye at the time and claimed that they did not want to see him given credit for the goal.

“I couldn’t be bothered to make a fuss. At that time, ‘Rolle’ had not scored in any of his matches for Sweden so I figured I couldn’t take it away.”

Roland Nilsson later scored a further goal for Sweden and so Brolin thinks the time has come to put the record straight.

The television footage of the match clearly shows that Nilsson’s long speculative shot from outside of the penalty box deflects off Brolin and into the corner of the Norwegian goal.

Brolin gains support in his claims from Tommy Wahlsten, a Swedish football historian who told SVT:

“The person who touches the ball last is usually counted as the goalscorer,” Wahlsten confirmed.

Tomas Brolin is one of Sweden’s top ten goalscorers of all time, with the highlight of an injury-plagued career coming in the 1994 World Cup in the USA when Sweden qualified for the semi-finals.