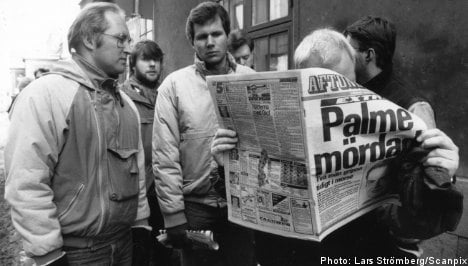 With a time limit for murder indictments currently set at 25 years, the search for Palme’s killer had been due to come to an end in 2011.

But on Wednesday Sweden’s parliament passed a bill exempting certain crimes from the statute of limitations. these include murder, manslaughter, human rights violations, genocide and terrorism. The new legislation comes into effect on July 1st this year.

As the new law will apply retroactively, murders committed by adult perpetrators in the last quarter century and onwards no longer have an expiry date for prosecution.

Olof Palme was shot dead on a main Stockholm thoroughfare on the evening of February 28th 1986 while walking home from a visit to the cinema.

Petty thief Christer Pettersson was sentenced to life imprisonment in 1988 for the murder after being identified as the killer by Palme’s wife, Lisbet. He was later released on appeal.

No other suspect has ever been brought to trial in the case.