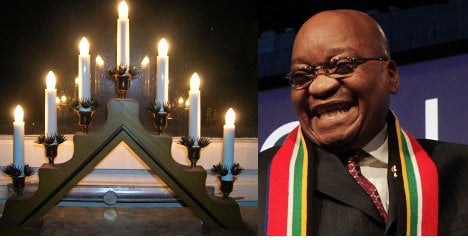 “He wanted to have them in his church. But we did not have that many, so I had to call around to other stores in the vicinity. They had 15 at the Ica store in Svedala,” Kerstin Lundström at Malmö airport told local newspaper Sydsvenskan.

Zuma, who succeeded Kgalema Motlanthe as South African president after the 2009 general election, was staying at the Malmö Airport Hotel in conjunction with his return from the Copenhagen climate conference held in December.

While in Scandinavia he took a liking to the advent candlesticks that typically adorn the window sills of every Swedish home over the Christmas period.

The newspaper reports that despite his lofty status as a foreign dignitary, Jacob Zuma was obliged to pay the same price as everyone else for his Swedish souvenir.

Zuma has courted controversy of late after it emerged that he had fathered his 20th child by Sonono Khoza – a 39-year-old woman who is not one of his three wives.