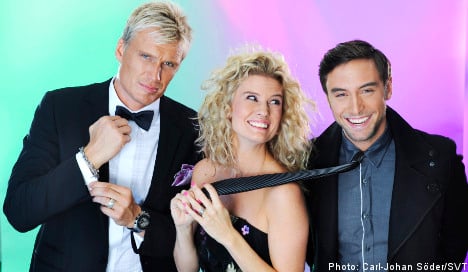 The flamboyant singing and dancing fest was a clear winner in last week’s television audience ratings, beating Antikrundan — the Swedish version of the Antiques Roadshow — into second place on 2.1 million.

While state broadcaster Sveriges Television will be enjoying the glow that the guaranteed ratings success brings, the viewing figures were in fact down 300,000 on the first heat in 2009, the lowest figures since 2002.

On stage the audience were treated to an all action show by Hollywood actor and co-host Dolph Lundgren who performed a rendition of Elvis Presley’s A Little Less Conversation.

The heat, broadcast from Örnsköldsvik in northern Sweden, was won by Salem Al Fakir with Keep on Walking. Ola Svensson and Unstoppable joined him in the final in the Stockholm Globe Arena in March.

A second chance was afforded to Pain of Salvation with Road Salt, and Jessica Andersson with I Did it For Love.

The Eurovision trail heads slightly south next Saturday with heat two to be held in Sandviken.

No doubt much to the disappointment of Eurovision fans Dolph Lundgren will not however be in attendance but has promised to join the show on a live broadcast link from California.