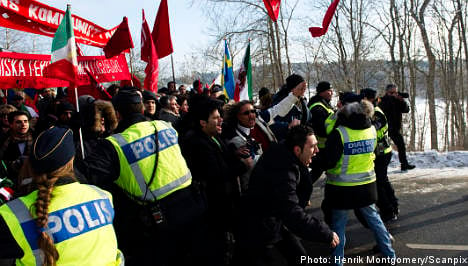 Some 250 demonstrators hostile to Tehran’s regime gathered in front of the Iranian embassy in Stockholm to mark the 31st anniversary of the 1979 Islamic revolution.

About 30 of the protesters started throwing rocks and pieces of ice at the police, Stockholm police spokesman Ulf Lindgren said.

He said one policeman had been hit and a protester was hurt, while two other protesters were arrested for violence against police forces. Police dispersed the crowd.

The demonstration, which had a licence to continue to 4pm, ended prematurely at 3pm.

A witness told news agency TT that the clashes occurred when the demonstrators tried to force a way through a police line.

A police officer is reported to have been slightly injured after getting a piece of ice in her head, while one demonstrator suffered a broken arm.

According to the police, the demonstration gathered around 300 people. Further demonstrations occurred at Mynttorget, Medborgaplatsen and Sergels torg in central Stockholm.

Sweden has a large Iranian community, estimated at around 80,000 people, including around 57,000 born in Iran, most of whom are exiles from the Islamic regime.

In Tehran on Thursday, Iranian opposition leaders Mohammad Khatami and Mehdi Karroubi came under attack and their supporters clashed with police as vast crowds massed to mark the 1979 revolution.