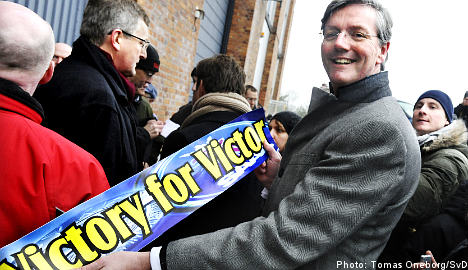 The EIB agreed that the loan would be guaranteed by the Swedish state, a statement said.

The European Commission backed the Swedish state-guarantee earlier this month.

“I am very upbeat and very please that the largest barrier in the entire deal is now out of the way,” Spyker CEO Victor Muller told news agency TT.

“We are now moving quickly towards a conclusion of the deal. Everything is likely to be done next week.”

Spyker said earlier this month that it intended for Saab to turn a profit by 2012, requiring an investment of about a billion dollars.

The Swedish company, which manufactured under 30,000 cars in 2009, hoped to increase this figure to more than 120,000, its chief executive Jan-Åke Jonsson said at the same press conference.

Muller said Spyker would apply for a double listing in London and later possibly also in Stockholm, and would consider delisting from the Amsterdam stock exchange.

“Having a listing in London is a much better way of getting close to investors than staying in Amsterdam,” he said.

Proposals to change the new company’s name to Saab Spyker Automobiles would be discussed at the next annual general meeting in April.

Muller had reiterated the finalisation of the deal would be conditional on Spyker obtaining the loan from the European Investment Bank.