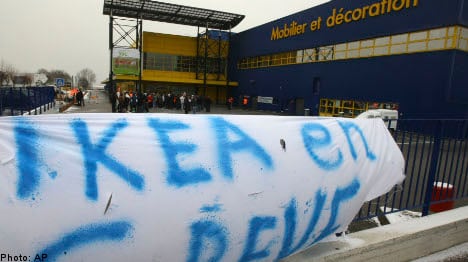 Management said some 500 of the 5,500 staff scheduled to work on Saturday, one

of the busiest days of the week, had not turned up, while the CGT union

claimed more than 50 strikers took part in the stoppage.

Stores were picketed by strikers but the only one closed was at Franconville in the Paris suburbs, where manageress Claire Hery said there had been a threat of strong action by unions.

The unions are demanding a four percent pay rise for 2010, while the company has proposed one percent across the board and another one percent on merit.

Ikea, known for its flat-pack ready to assemble furniture, is an unlisted, family-owned company which employs 123,000 people worldwide and has 267 stores in 25 countries, with another 34 operating under franchise.

In June, it said it had slashed 5,000 jobs to cope with the drop in demand brought about by the global economic crisis.

Europe represents 80 percent of Ikea’s sales, while North America makes up for 15 percent and the Asia-Australia region five percent.