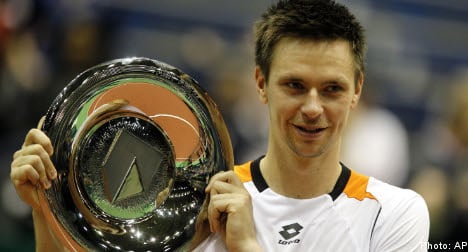 Söderling confirmed his return to form with a 6-4, 2-0 win over former champion Mikhail Youzhny on Sunday, after the Russian was forced to retire through injury.

Anders Järryd in 1993 was the nation’s last winner at the Ahoy arena. Söderling lost the 2008 final here to Frenchman Michael Llodra.

World no.8 Söderling broke a personal title dry spell dating back to last July in Båstad as he earned the victory in 54 minutes.

Youzhny was unable to carry on, ending his participation after losing serve in the second game of the second set after receiving treatment in the first set.

“It felt bad in the (Saturday) semi-finals, but today it was getting worse with each game,” said the Russian. “It feels a bit like a muscle problem but I’m not sure,” admitted the Russian.

“It was especially tough to start the running motion, taking the first few steps. There seem to be a lot of injuries already early in the season, it’s partly due to the tough calendar.”

Last year’s Roland Garros finalist Söderling hopes his Rotterdam win could be a springboard for his career, which made a breakthrough last spring when he faced Roger Federer for the French Open title.

“If I have a good year and stay healthy I could make it to the top five – if I don’t work hard I could be in the top 50.

“You have to work well and do everything right. The leading guys show that.”

“But I think there could be some new winners of the Grand Slams this season – and yes, I could be one of them.”

Söderling’s success this week capped his return to form after losing first-round matches in both of his previous 2010 events, Chennai and the Australian Open.

Söderling said that an enforced rest at home after going out in Melbourne finally put him right physically and mentally.

“I didn’t start so well in the first few matches, but along with my coach we worked and my game is back. I’m playing really well once more.

“But that’s all over – I feel perfect again.”

The 25-year-old improved to 5-2 on the season and moved his record against Youzhny to 3-1 with wins in their last three meetings.

Söderling and Youzhny had combined in the semi-finals to eliminate the tournament’s top two seeds, with the Swede eliminating number two Nikolay Davydenko and Youzhny claiming victory over world number two Novak

Youzhny was playing his fifth final in his last eight events while Söderling found himself in a title match for the first time in 13 tournaments.