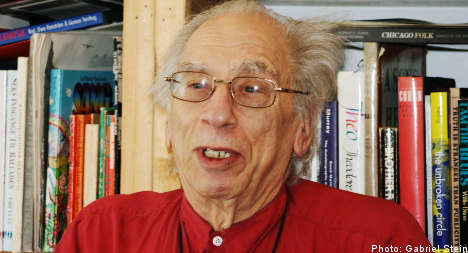 Forty-nine years after organizing Bob Dylan’s first concert at Carnegie Chapter Hall in New York City, Izzy Young still promotes, but he is a long way from the Big Apple, and the likes of Bob Dylan.

Right at this moment, he is sitting at a little wooden table in his Folklore Centrum near Mariatorget in Södermalm. He wears an old flannel shirt buttoned to the neck. He is looking onto the snowy street, his hands wrapped around a coffee mug. Young is considered one of the most important movers and shakers of the Greenwich Village folk scene in the sixties.

“I want to be recognized for what I do,” says the 81-year-old, New York City native. “I work with Swedish music.”

Back in 1957, he borrowed $1,000 to open the Folklore Center on MacDougal street in the bustling heart of Greenwich Village. It quickly became the hub for the American folk music scene.

Since then he has presented the debut concerts for hundreds of musicians, many of whom are now famous, such as Patti Smith, Emmylou Harris and Tim Buckley. On November 4th 1961, Young lost over $200 promoting Dylan’s first concert, but he was able to persuade the 19-year-old to accept $10 in pay for his efforts.

Then in 1973, together with his French girlfriend, Young moved to Stockholm, in part, he says, because she wanted to, but also because he had fallen in love with Swedish folk music and he needed to get out of New York.

“When I was here the first time, I thought Sweden was utopia,” explains Young. “I said, ‘I don’t want to die in New York, I’d rather die in Stockholm.’ I mean look at these windows. It’s a luxury to sit here. There’s no bars, you can’t get that in New York City.”

Despite diabetes and a bit of a forward slouch, Young is full of energy. Every few minutes he percolates up out of his seat to show me a picture of his father’s bakery in the Bronx or a letter he has received from Dylan’s office.

He still presents concerts at the Folklore Centrum, which is the size of a small studio apartment. Here, floor-to-ceiling shelves overflow with folk music stuff; pamphlets, folders, books and who-knows-what-else. He has an extensive library on all types of folk, world, blues, Jewish and other types of music. He also publishes a newsletter seven times a year on the Swedish folk music scene. It costs 140 kronor per year and has about 3,000 subscribers.

In many ways, this son of Jewish, Polish immigrants picked the wrong country. He is a brazen New Yorker. He likes engagement, discussion and provocation, an attitude which clashes with reserved Swedes who avoid small talk, eye contact and confrontation.

“It’s sad that Swedes don’t come to see me…they can’t deal with me,” says Young. “Swedes come in and they say, ‘what do you do here?’ People don’t understand. It’s främmande. It looks strange to them. To have books on Sweden, in Sweden, they’re not used to it.”

If you can get beyond Young’s complaints and his hard exterior — and that is a big if — you will find a good-natured man. Three and a half hours, two cinnamon buns and a pot of coffee into our one-hour interview, I realized that he likes to tell stories. He talked about the haze which emanated from his bathroom on MacDougal street, how he led square dances at resorts in Upstate New York (think Dirty Dancing) and how he was scared to death of Patti Smith when “she was a kid because she was such a damn revolutionary force.”

If only words and memories were money. Young is apparently broke in real life and is living in a 36 square metre apartment in Fredhäll. “You know, it’s a first apartment for someone who just got out of high school in Sweden,” he says, laughing. “For me, it will be my last apartment.”

In one instant, like a Zen master who has figured out the meaning of life, he displays pride for never sacrificing his love of folk music to make a good living. But in the next breath he sings a sad song of regret and exploitation.

“Everyone wants to record me, have me speak for them, journalists want to interview me, but no one wants to pay me,” he says. “If I recorded everything I heard it would be worth millions of dollars today.”

He does, however, possess a few material treasures. Somewhere in a bank vault in Stockholm lie two original manuscripts of Dylan songs which Dylan gave to Young more than 40 years ago.

He has been offered tens of thousands of dollars for the “Talking Folklore Center” manuscript, which he says was hanging on the wall by a tack in his store in Greenwich Village for twenty years. But he won’t sell it. It is not his style. “I never earned $10,000 a year in my life, so it doesn’t change anything for me to sell it now,” he says.

The other manuscript, “Go Away You Bomb Go Away”, is a talking blues song which Dylan wrote in 1963 when he was 22. Young rediscovered it in his archives and published it for the first time in 2007.

Young is irritated with parts of the past and lots of the present, but he seems to live in the now, and appears to be happy. He doesn’t romanticize the sixties, or his time in New York. To him life is a continuum. When you ask him about his favorite concert or musician he is uncharacteristically quiet. He prefers live music and does not listen to “records,” as he calls them.

“You see I have wild ideas but I do it pretty much at room temperature,” he explains. “I am enjoying myself. That’s what I should be doing.”

For all of his accomplishments, Young’s greatest achievement is perhaps the hardest for anyone to emulate. He discovered at an early age exactly what he loved and then he devoted his life to it. “He had a lot of resilience,” Dylan wrote of Young in his book, “Chronicles: Volume One.”

“I’m doing what I have to do,” says Young. “I’m fighting, but I’m succeeding in my way. Without money, without getting paid. But I have freedom.”