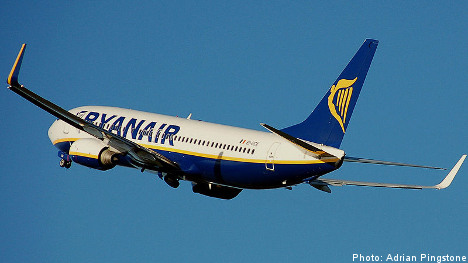 Representatives from the airport’s owner TBI Abertis and Ryanair held a summit meeting on Monday to bring an end to their very public falling out.

“From yesterday evening (Monday) we have returned to normal routines. We will continue to negotiate for a couple of weeks, and I think that we will resolve this,” Skavsta Airport chief Dot Gade Kulovuori told the newspaper.

Skavsta Airport, 100 kilometres south of Stockholm, has recently accused the low-cost flyer of not having paid its bills, explaining why the airline has been unable to land late arrivals.

Extra service for the controversial Irish airline had been withdrawn as a result of the alleged absent funds and thus late flights have not been permitted to land.

At the end of last week, two Ryanair flights were delayed and were thus diverted to Stockholm Arlanda Airport as Skavsta Airport had closed its runway claiming that it was holding to the letter of its agreement with the airline and no more.

The Local reported last week that Ryanair had claimed that the closure of the airport’s runway was an illegal move.

Passengers on the Ryanair flight from Malta were diverted the almost 150 kilometres north to Stockholm Arlanda, where they were transferred by coach back to Skavsta.

“It was illegal because we were not outside of the required time limits,” Stephen McNamara told The Local at the time.

But Skavsta chief Dot Gade Kulovuori rejected the accusation contending that the airport was holding its end of the bargain.

“We have previously been more flexible with delays, but now we follow our agreement,” Gade Kulovuori said at the time.

Skavsta Airport has suffered interruptions to service during recent months as a result of heavy snow falls with several Ryanair flights diverted, cancelled or delayed as a result of airport closures.