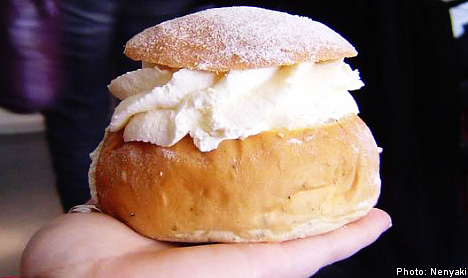 If there’s one thing every Swede loves it’s a fika, or coffee break. Back in the day, etiquette demanded that at least seven types of cakes and buns be served with coffee at gatherings in people’s homes. The tradition, which dates back to the nineteenth century, is still very much alive among the granny and grandad generation.

But buns and cakes retain their popularity outside the home too, with everyone from teenage girls to young dads factoring cake and coffee into a day out in town. Even harassed lawyers manage to munch the occasional bun, while in public sector workplaces, the mandatory coffee break is part of the fabric that keeps the bureaucracy together.

But what are the buns of choice in this nation on Europe’s northern edge? Here The Local, with surgical precision, picks out ten of the most mouth-watering creations from the vast pantheon of Swedish cakes and buns.

Nothing exceeds like excess, and the semla is truly the Keith Richards of the Swedish bun world. Traditionally served on Shrove Tuesday to mark the beginning of the lenten season, the only way this cream-filled calorie bomb could be any less healthy would be if it was dipped in cocaine and served with absinthe. And, like absinthe, a semla makes the heart grow fonder. And more prone to cardiac arrest.

Märta’s Cut Chocolate Cookies are a perennial favourite from the Swedish Cakes and Cookies (‘Sju sorters kakor’) cookbook, of which every Swedish family owns at least three copies. The book first came out in 1945 and there are riots on the streets of Sweden every time a new edition is published.

In the weeks before Christmas a darkness descends that seems like it may never lift. Sweden is aglow with candlelight of both the natural and electric variety. Everywhere you look, people are ramming these swirly buns into their faces. And if you like a bit of saffron and raisin, you too will soon be masticating wildly.

I know: let’s get a roll of green marzipan, lace it with punch, dip it in chocolate at both ends, and call it a vacuum cleaner. It all makes total sense. Delicious.

Though of French origin, Sweden has very much taken the bisque to heart. This buttercream and chocolate-topped almond UFO has become as Swedish as the kebab pizza and is often served with rose hip soup (‘nyponsoppa’).

Swedish chocolate maker Marabou struck international gold when it began cooking up batches of Dajm bars in the 1950s. These crunchy butter almond treats used to be called Dime bars in the UK and Ireland, but now they’re known as Daims thanks to the whims of some cucumber straighteners with too much time on their hands.

If you’ve never seen a Daim, a UK ad from the 90s described it as being the opposite of an armadillo, which is reasonably accurate. Anyway, not everybody is content just to munch on a Daim straight from the wrapper. Some people are so enamoured of Daims that they break them up and sprinkle them on chocolate cakes, which is pure lunacy. But it’s also very, very tasty.

The Wikipedia entry on Radio Cakes says they are so called because they date back to the early days of the broadcasting medium and were soft enough not to disturb the listening experience. It’s a nice idea but everybody else says they got their name because they look like old-fashioned transistor radios. But they certainly don’t taste like radios. They taste like layers of crumbled Marietta biscuits buried inside chocolate cake, and that’s exactly what they are.

One of the most duplicitous cakes on the shelf, the Swedish cheesecake bears little resemblance to its international cheesecake cousins. When words like rennet and casein crop up in the baking process, you know you’re dealing with a deviant variety. So be careful what you ask for in cake shops. If you want cheesecake with a biscuit base, order cheesecake in English. If you want the warm, soft Swedish version, often served with cloudberrry jam, then your best bet is to ask for ostkaka. The Friends of Ostkaka society celebrates the cake’s existence every November 14th. The society’s governing board is made up of a number of county governers, all of whom are probably quite mad.

Swedes love their cinnamon. You’ll find it in your semla, for example, at the top of your café latte and, if you’re not careful, as a mild irritant in your trousers. But mainly you’ll find it in its natural home: the ubiquitous cinammon bun.

A kladdkaka is like a big round brownie topped with lashings of cream. Doctors secretly love it because it brings them new business.

The princess cake is one of those classics you’ll find in every old-fashioned konditori. It serves as a reminder that even in those sepia-tinged days of the 1950s, when Sweden was at its most optimistic, people ate huge dome-shaped cream cakes that looked like they were cooked in a nuclear power plant.