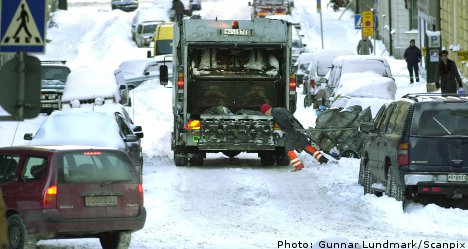 The Swedish meteorological agency, SMHI, has forecast more snowfalls for the coming weeks in most parts of the country as the coldest winter in memory continues to keep the whole of Sweden blanketed in white.

The costs for snow clearance has continued to climb as heavy new year snowfalls continue well into February with many of Sweden’s municipalities already exhausting allocated funds, according to the newspaper.

Malmö, Gotland, Halmstad and Kalmar have already used up their budgets, a further five already know that will overspend, and in a further 12 there is an overhanging risk of a deficit which will need to be carried over to budgets for 2011.

Councils will also be forced to cut back on road maintenance during the summer, with some warning of an impact on traffic security.

Malmö council, which has already spent 20 million kronor ($2.77 million), two million kronor more than budgeted, has advised that road painting and street-lighting is likely to be cutback during the summer to compensate.

Just as the harsh winter takes its toll on Sweden’s roads, municipalities may also be obliged to cut back on asphalting and reparation – at a time when it will be most needed.

“This is not good as it is often a question of safety. We know that it will not only affect asphalting; measures to reduce traffic speeds, and improve safety at pedestrian crossings, may also be delayed,” said Jan Sandberg at The National Society for Road Safety (NTF) to DN.

The railways and train services have also been a bone of contention for Swedes this winter with cancelled trains and widespread delays as a result of the sustained cold temperatures and snow.

Representatives for national rail operator SJ and the Swedish Rail Administration (Banverket) have on Thursday been called in to the parliament to account for the sub-standard service.

December was the worst month for delays in 15 years, according to Rail Administration statistics. Continued snow and ice indicate that problems are set to persist for Sweden’s hard hit commuters.

SMHI has forecast a further decimetre of snow in across Götaland and the Stockholm area on Thursday and Friday.