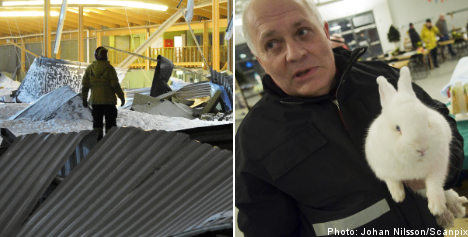 Described by the UK’s Fur and Feather magazine as “the biggest show in Sweden”, the Nyköping exhibition, 100 kilometres south of Stockholm, had attracted 1,648 rabbits and their owners to the local tennis hall.

“It was very, very fortunate that the collapse happened at night. If there had been people in the building they would probably not all have survived,” rescue coordinator Lars Ahlgren told local newspaper Södermanlands Nyheter.

The roof and one of the gable walls of Rosvalla tennis hall gave way at 1.30am on Saturday. Police have not yet fully established the cause of the collapse, though heavy snowfall is being considered a fairly safe bet.

The tennis hall was locked at the time of the collapse. Fortunately, a dance event organized by the local rabbit owners’ association was taking place in a separate building.

Police said many rabbit owners remained outside the tennis tall at 6 o’clock in the morning.

“There are a lot of sad rabbit owners at the scene. We’ve been focussing on making sure that none of them try to get in to the rabbits. There is a risk of further collapses,” police inspector Urban Nordqvist told Södermanlands Nyheter.

Lars Ahlgren said around half of the rabbit cages were located under the section of roof that had collapsed.

“The rest of the cages are at the other side and we’re going to try to lift those out mechanically,” he told news agency TT.

“We’re not going to attempt to rescue the rabbits under the collapse, since that would mean sacrificing attempts to save the rabbits that we know are still alive.”

Exhibition organizer Johnny Johansson (pictured) was in place to welcome the first rabbit that managed to make its way out of the wreckage. But it is not yet known how many rabbits died when the roof caved in.

“There are pockets where the rabbits are hiding,” rescue worker Ulf Jämtäng told TT.

“Some of them are finding open slots and getting out; we’re catching rabbits all the time.”

All escaped rabbits are being placed in hutches outside the exhibition area.