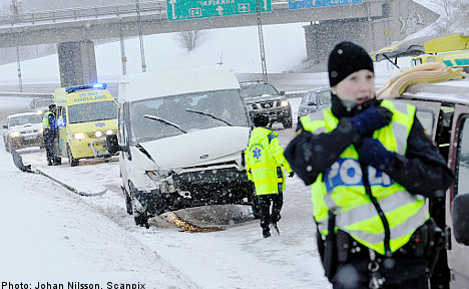 Key intercity and commuter train services were cancelled, for the most part, as personnel worked around the clock to clear snow and ice from tracks and frozen switches. Passengers were advised to check appropriate websites for updated schedules before heading for stations.

Alternative bus transport could not be assured because of highway conditions.

Ambulance and rescue services were also delayed over the weekend. “People have had to wait for ambulances. We’ve had several cases where ambulances have found it very difficult to arrive. This has been a problem throughout the southern part of the country,” said Anders Klarström, spokesman at SOS Alarm Sverige (Sweden).

It has been the worst winter in 22 years. Klarström said northern Sweden managed better because the region is more accustomed to severe winters. But “you can see with your naked eyes that resources in the southern regions simply don’t suffice. We simply weren’t prepared to deal with as much snow as we’ve experienced this winter.”

It was unclear when the important Stockholm-Göteborg train route would be fully operational. Over the weekend about ten of these trains were running up to 15 hours late, according to the information department of Swedish Railways (SJ).

In Göteborg, Frida Grönberg boarded a Stockholm-bound train at 1:30 Saturday afternoon. Just before arriving in Hallsberg the train came to a dead halt. Switches had frozen.

According to the newspaper Aftonbladet, Grönberg and fellow travelers spent the night in an atmosphere of confusion and outright aggressiveness. The mood was grim. “I saw a passenger who opened an emergency door and simply jumped out,” she told the newspaper.

Personnel had no information whatsoever. “They wandered about, and sweared. They heard nothing from management

“There were no buses, nothing.”

The train was still stuck at 2 am Sunday morning when somebody got very sick. A conductor walked about and asked if there were any doctors onboard. “This is an emergency. I’ve got to ring 112 (emergency telephone service),” he said.

Thirty minutes later the train finally got underway for the long trip to Stockholm, and got as far as Södertälje near the Swedish capital before getting stuck once again. “We couldn’t take it anymore, and disembarked. We managed to get a taxi that drove us to a youth hostel.”

Worst hit was Western Sweden. In the province of Västergötland, special vehicles with chains were deployed to deliver insulin and other vital medicines to the homes of chronically sick citizens.

Numerous accidents were reported on the nation’s highways, “but in spite of extremely poor road conditions the number of truly serious accidents was relatively low,” said Thomas Andersson, information manager at the Swedish Road Administration (Vägverket).

Snow-laden rooftops verging on collapse posed a hazard. Part of a shopping center in Jönköping was sealed off after shoppers noticed alarming conditions. The roof of a recreational center in Borås collapsed during football training. Nobody was hurt.

In the past two weeks collapsing roofs have raised questions about their construction. Until the end of the 1980s the construction of rooftops was overseen by an independent inspector. Since then, the contractors themselves have been given this task.