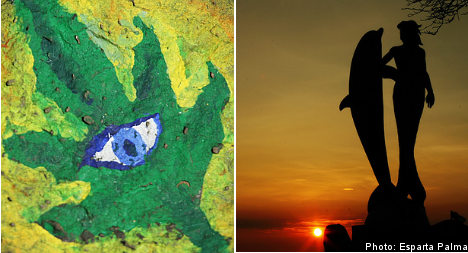 The 26-year-old cannabis connoisseur declared to surprised police officers in the provincial Skåne town of Eslöv that he was not satisfied with the quality of his stash and would like to lodge a complaint, local newspaper Skånskan reported.

The man told officers that his ganja had not delivered the desired effect, leaving him feeling decidedly ill-at-ease and in the midst of a nightmare scenario where his girlfriend resembled a dolphin.

The young dope fiend confirmed to police that he was a regular user of hashish. In his ten years of recreational use of the drug, classified as illegal in Sweden since 1930, he had never experienced such a bad trip, he told the police.

The man thus suspects that his hash could have been laced with a psychedelic substance, such as LSD.

The man told how that as he sucked on his joint, his television began to talk to him and he came to the realisation that his girlfriend was in fact a dolphin.

The whole experience left the man feeling shaken and frightened, the newspaper reported.

Eslöv police told the newspaper that it was unclear if the source of the man’s hash supply could face any charges relating to the quality of his product.

“It could possibly be classified as assault, if the hash is found to contain LSD,” Mats G Odestål at Eslöv police told Skånskan.

But either way it is unlikely that the dealer will face any charges as the 26-year-old proved reluctant to divulge the identity of his supplier.

The penalties for crimes involving cannabis and its derivatives in Sweden vary according to how serious the crime is considered to be. Possession of a small amount (under 50 grammes) is considered a minor offence typically punishable with a fine, while dealing generally carries a prison sentence.