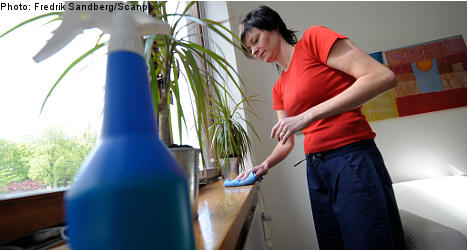 “This has become an incredibly clear symbol for what the opposition is offering in terms of jobs and employment policy, and also for the whole service sector,” Moderate Party secretary, Per Schlingmann, told Svenska Dagbladet (SvD) newspaper.

While the Moderates and their centre-right coalition partners claim that a controversial tax-relief for household services is creating thousands of jobs, opposition parties have argued that it only benefits the rich.

The so-called “RUT-deduction”, which allows households to deduct half the costs of hiring in services such as cleaning and baby sitting, became something of a political football, with opposition left-green parties first promising to scrap the policy and more recently appearing to back track.

The issue may prove highly divisive to the opposition with the largest party, the Social Democrats indicating they could maintain the policy in modified form, while the Greens and the Left Party remain firmly opposed.

“It is bad use of tax money,” Left Party leader, Lars Ohly, told SvD. “And it won’t become any better if you find some kind of new arrangement, or try to change it or extend it in some way.”

According to a report from Almega, an industry organization representing the service sector, housekeeping services account for more than 11,000 jobs in Sweden.