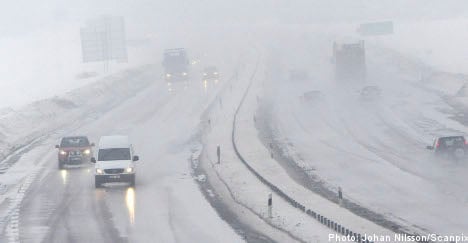 “It will snow up to a decimetre in southern and eastern parts of the country, with brisk winds in Skåne,” said Lisa Frost at the Swedish meteorological agency SMHI to news agency TT.

The agency has issued a class one (on a climbing scale of four) storm warning in eastern areas of central Sweden. The coast of Norrland will also see snowfalls, although somewhat lighter.

Train services will be hit over the coming days. National rail operator SJ will continue to run fewer trains on the Stockholm-Malmö and Stockholm-Gothenburg routes, with high speed X2000 trains from Malmö-Gothenburg suspended completely.

The weekend thaw has prompted snow and ice to fall from roofs across Sweden.

In central Norrköping the emergency services and the police issued warnings for falling snow and ice, but no one is reported to have been injured.

“But that had more to do with luck than anything else. Masses of snow and ice has fallen from roofs in Östergötland today,” Johan Holgersson at Linköping county communication centre told news agency TT.

There were several reports of damaged cars in Stockholm on Sunday as the warmer temperatures and light rain dislodged massive amounts of snow and ice on roofs.

But after the snow cometh the sunshine – a high pressure front with clear weather and above-zero temperatures will follow later in the week.

“As the sun warms the days, there will be slight feeling of spring,” Lisa Frost said.