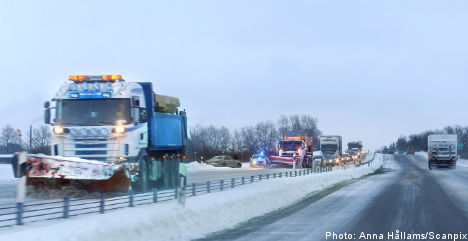 The Swedish Road Administration (Vägverket) has warned of treacherous icy conditions on roads in the Stockholm area as well as along the east coast, both north and south of the capital.

Icy roads in southern Sweden caused a spate of accidents during Monday evening.

Several trucks were involved in a collision on the E4 motorway between Örkelljunga and Skånes Fagerhult at around 3.30am on Tuesday morning.

According to police, no one is reported to have been injured in either of the accidents.