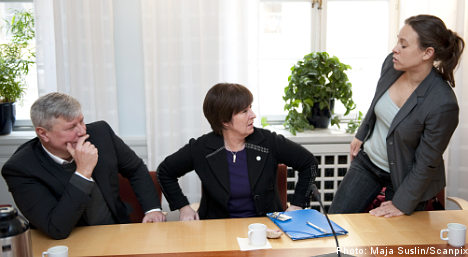 The three-party opposition announced their joint position on Tuesday after a meeting with pensioner groups, ending speculation that the issue has divided the Green Party from its coalition partners, the Left and Social Democrat parties.

The Green Party said last week that it would consider keeping the system in place in order to protect jobs. Some Social Democrats have offered support to the Green Party position while Lars Ohly, the leader of the Left Party, has categorically ruled it out.

But now the three partners have agreed that the controversial initiative will be no more if the electorate votes to replace the Alliance government in the autumn.

“If we win the election it will be abolished. There is no doubt about that. The tax relief’s formation is unfair and wrong,” said Social Democrat leader Mona Sahlin on Tuesday.

Both Lars Ohly and Green Party spokesperson, Maria Wetterstrand, expressed criticism of the system, although Wetterstrand would like to see a discussion over the timing of its abolition.

The Local reported on Sunday that the governing Moderates had launched a campaign to make housekeeping a major issue in the upcoming elections.

While the Moderates and their centre-right coalition partners claim that the so-called “RUT-deduction” is creating thousands of jobs, opposition parties have argued that it only benefits the rich.

The tax relief allows households to deduct half the costs of hiring in services such as cleaning and babysitting.

According to a report from sector organisation Almega 11,400 people are employed within household services, of which half would lose their jobs if it were abolished.

The Liberal Party (Folkpartiet) has announced its ambition to extend the tax relief to encompass more services and to increase it to 75 percent of the cost.

“I am a little surprised over this. It should be able to stay. Many pensioners see it as an opportunity, even if its form can be discussed. It is not particularly unfair and a lot of informal labour has become formal,” he said.

The National Pensioners’ Organisation (PRO) chairperson Curt Persson said that the group has no objection to the system but warned that many local municipalities were hiking the cost of needs-assessed home help so that the tax relief made private suppliers cheaper.