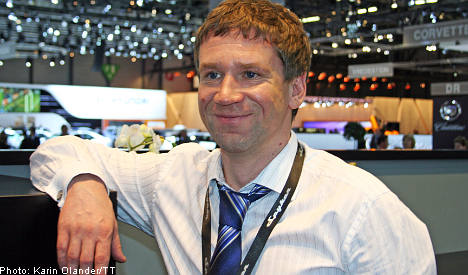 In a meeting with journalists at Geneva’s ongoing motor show, Antonov confirmed that he aims to formally own the Swedish car maker and claimed that if he remained unable to lend the financing, Spyker would struggle to raise the funds to complete the deal.

When asked if he was prepared to provide the outstanding $24 million which Spyker is due to hand over to General Motors on July 15th, Antonov replied:

“Absolutely. If I am not allowed to then Victor (Muller) could be in a tough situation,” according to the newspaper.

The Russian businessman, who lives with his family in London, confirmed that he is working to clear his name and persuade General Motors that the allegations which have circulated around his business empire are unfounded.

Antonov, who said that trips to his native Russia always carried an element of risk to his personal security, claimed that reports that the US government ordered GM to stop the deal over Antonov’s involvement sounded unlikely.

“I think that it is more that GM does not want to transfer technology to Russia. In the same way as they tried to stop Magna and Russian Sperbank from buying Opel,” Antonov said, according to SvD.

Antonov revealed that he has enlisted the help of a team of US lawyers and investigators to persuade GM to change its position. Either way it is the Russian’s banks that are backing Spyker Cars, Victor Muller and thus the Saab purchase, Antonov claimed.

“They threw me out but they are using my money,” he said.

Swedish media have reported that the deal was delayed in late 2009 as an investigation ordered by the Swedish government into the workings of Spyker and its Russian investors landed on the desk of the FBI and put a temporary stop to Spyker’s takeover of Saab.

A source close to the government told business daily Dagens Industri (DI) that Swedish security services (Säpo) were given the task of tracking the business interests of the Antonov family.

The assignment was initiated by the Swedish National Debt Office (Riksgälden) which brought in private investigators to aid the mission.

Säpo is reported to have found connections between the Antonovs and organised crime as well as involvement in money laundering.

To prevent the Russians gaining any possible control over a new Saab-Spyker venture the government handed their findings over to the FBI.

The US government reacted quickly to the report and reported to have given the board of General Motors a direct order to stop the deal, which happened on December 18th.

Hans Lindblad, state secretary at the Swedish Ministry of Finance, confirmed the course of events to the newspaper.