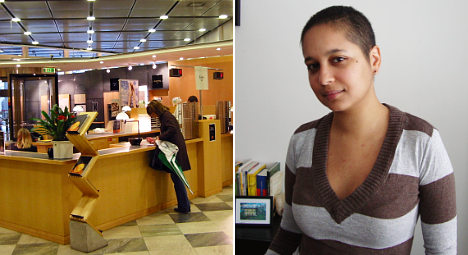 Sylvie Acra has been issued with a Swedish personal identification number and holds a valid Swedish work and residence permit. Despite this, she has been unable to open what she describes as a “functional bank account”.

“I first went to SEB and Nordea and they both told me that, as I was only looking for a job but did not yet have one, they were unable to accommodate me,” she told The Local on Thursday.

Ragnar Ros at Nordea confirmed to The Local on Friday that the bank’s policy requires “regular deposits” in order to open a bank account.

“It is not the same as having a job and there is no fixed amount required. We are currently looking over the issue as several people have pointed this out to us,” he said.

SEB’s press spokesperson, Eva Odefalk, told The Local on Friday that there is no explicit requirement for a prospective client to have a job but that their purpose for opening a bank account has to be assessed.

“We have to check to ensure that there is a legitimate purpose for opening the bank account and what it is going to be used for. This we do on a case by case basis,” she said.

Sylvie Acra also decided to try her luck at Swedbank, where her Swedish boyfriend keeps his money. She decided to call the bank first to see if her visit would be worthwhile.

never heard of the policies to which Nordea and SEB had referred,” she said.

But when Acra arrived at a Malmö branch of Swedbank she was told that, as her US passport was not considered valid identification, she could not be given a Visa debit card and had to make do without internet banking.

This is a situation that Anna Sundblad at Swedbank has recognised as something of a “Catch 22” for newly arrived immigrants.

“The question is: who has responsibility for this issue? We have issued ID cards before, and still do, but they are valid all over Sweden and we have to be certain [of a passport’s validity]. We are working with the Banker’s Association (Svenska Bankföreningen) to help the sector clarify the issue,” Sundblad said.

Lena Barkman at the Swedish Banker’s Association confirmed to The Local on Friday that according to tax agency regulations for applying for an ID card, a US passport is not classified as valid identification within Sweden.

“The tax agency (Skatteverket) has taken over responsibility for the issue. Many banks offer a service to their customers, but there is no obligation for them to issue ID cards,” Lena Barkman told The Local.

When she returned home, Acra decided to call Swedbank’s head office in Stockholm to check the bank’s policy. The bank’s customer service agent told her that although she would indeed have to make do with a Maestro card, there was no reason for her to be denied internet banking.

“This is a judgement that is made from case to case. We have no general rules for this and we have to make an overall assessment of the client’s financial position,” Sundblad said.

While Sylvie Acra is now able to deposit money in the bank and to withdraw it from ATM machines in Sweden with her Maestro card, she remains unhappy at the service she was given and intends to report the matter to the Swedish Consumers’ Association (Sveriges Konsumenter).

“I want to integrate in society and be a contributing member. And it seems that I am being excluded from basic things that are a part of moving into that country, such as having a bank account to be able to monitor expenses, and pay bills.”

Lena Barkman said that the clarification of rules and responsibilities for ID cards is a prioritized issue for the banker’s association.

“This is a problem that we are working actively with. We are part of the tax agency’s working group on the issue,” she told The Local.

The Swedish Tax Agency assumed responsibility for issuing Swedish national identity cards on June 1st 2009, ending a period of uncertainty since the now shuttered Svensk Kassaservice announced in early 2007 that it would no longer be issuing ID cards to non-Swedes.