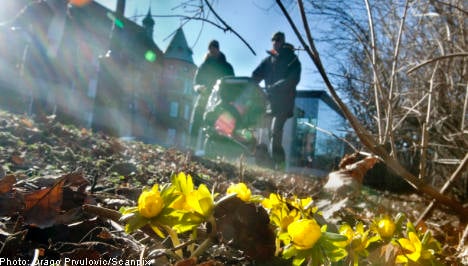 “Even if there’s a backlash, with temperatures falling several degrees below zero, it is now considered to be spring there,” said Lisa Frost at meteorological agency SMHI.

By Thursday morning the average daily temperature had hovered above zero for seven successive days at weather stations in Malmö, Lund and Falsterbo, thereby fulfulling the criteria used by meteorologists to define the arrival of springtime.

Counting back in time to the beginning of the balmy spell, spring is now calculated to have hit southwest Skåne on February 25th.

Nowhere else in the country has come even close to the magical seven days above zero. But the passing of winter is not as late as many think, said Lisa Frost.

“Spring does often arrive in mid-February in southern parts of the country. But people can easily forget how it’s been before. We had a lot of snow as recently as 2006 but it’s easy just to remember all the mild winters,” she said.