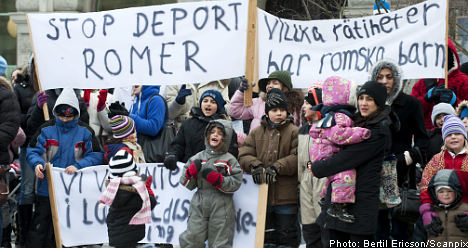 Buses filled with Roma people have been pulling into Gothenburg and Malmö on an almost daily basis.

The migration board chief is advising Roma people not to make the long trip to Scandinavia as their chances of being granted residency are “extraordinarily small”.

“They probably feel that they are living in difficult social conditions and maybe even that they are discriminated against, but this is not something that gives them the right to protection in Sweden.

“Generally they’ll quickly be informed that they can’t get a residence permit and they’ll have to go home,” said Eliasson, who added that the vast majority came to Sweden from Serbia, though some have also made their way north from Montenegro and Macedonia.

The Roma population in Serbia is considerably poorer than the wider population, and sporadic reports have emerged of violations perpetrated against Roma in Serbia, Kosovo and, recently, in Italy.

“But in order to gain asylum you need to be able to show that you are persecuted and risk violent treatment. It is very difficult to receive asylum from Europe,” said Eliasson.