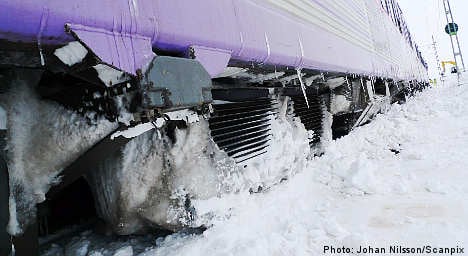 Late Saturday the Swedish Maritime Administration (Sjöfartsverket) rescinded an earlier recommendation that ships steer clear of a critical stretch in the Stockholm Archipelago. But only one ferry at a time was allowed to pass through the stretch, in order to avoid chaos that had reigned earlier.

The tough winter had its winners and losers, noted the afternoon daily Aftonbladet. Sport stores sold a record number of skis, and sales of winter apparel also delighted the trade. Items such as heavy coats and boots sold out altogether.

Another winner: taxi companies. “You can talk about an all-time high in January for many of the bigger taxi firms,” said Lennart Hamnered, chairman of the Taxi Federation (Taxiförbundet). Initial statistics from February were just as encouraging, he said.

Losers during the stern winter included homeowners with variably priced electrical contracts. Costs soared. In January a homeowner could reckon with an electrical bill some 2,000 kronor ($285) higher than in December.

Snow removal had cost the nation a record 1.3 billion kronor ($185 million) thus far, while commuter and long distance trains were still subject to delays because of maintenance problems–such as frozen switches and stalled locomotives.

Worst hit were deer that starved to death because food stocks were buried under the snow. As many as 30-50 percent of the animals were believed to have died during the winter, according to the west Swedish newspaper Värmlands Folkblad.

A high level grade 4 avalanche risk warning was issued in the Swedish mountains where tens of thousands were enjoying their traditional skiing holidays.