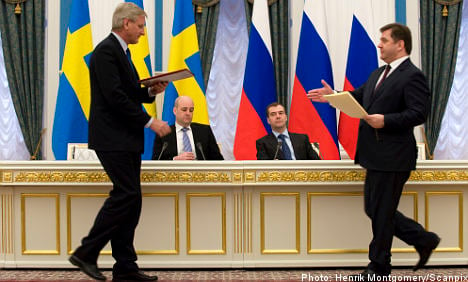 Pushing back at criticism of Russia’s human rights record in the North Caucasus, Medvedev made his comments at a joint press conference in the Kremlin with Swedish Prime Minister Fredrik Reinfeldt. Sweden has sparred with Moscow over abuses in Russia’s troubled southern region of Chechnya.

“If we are going to talk about the Caucasus, besides the problem of human rights, there is another problem that I told the prime minister about – the bandits who have unfortunately found refuge in Sweden,” Medvedev said.

“We can talk about adhering to human rights, but we must fight crime together, too…. I am counting on constructive cooperation with our Swedish partners on this issue,” he added.

Reinfeldt, who has sought to improve ties with Moscow that were strained by the Russia-Georgia war of August 2008, said he had a “frank and constructive discussion” with Medvedev about human rights.

Russia has criticised Sweden for refusing to extradite Chechen rebels such as Aslan Adayev, whom Moscow accuses of terrorism and other crimes connected to Chechnya’s bloody post-Soviet struggle for independence.

In 2008 Sweden’s Supreme Court blocked a Russian extradition request for Adayev, ruling that his offenses were political in nature.

During Reinfeldt’s visit to Moscow on Tuesday, Russia and Sweden signed agreements on space travel, health, culture and law enforcement. Medvedev and Reinfeldt also pleged to work together to fight pollution in the Baltic Sea.