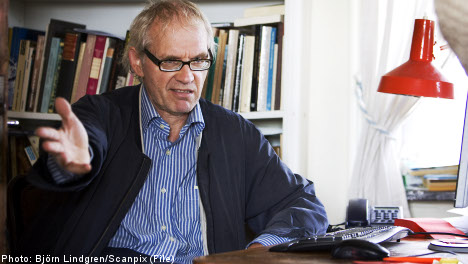 The four men and three women were arrested in the southern Irish towns of Cork and Waterford following an international operation involving European and US security services.

A police source confirmed press reports that they were Muslims arrested over an alleged plot to assassinate Swedish cartoonist Lars Vilks, who has a $100,000 bounty on his head from an Al-Qaeda-linked group.

“The operation… is part of an investigation into a conspiracy to commit a serious offence (namely, conspiracy to murder an individual in another jurisdiction),” said a statement from Ireland’s national police service.

arrests but refused to comment on any threat to Vilks.

“Right now we are in continuous touch with the authorities involved, including our Irish counterparts,” he told AFP, adding: “I cannot say anything about any possible threats against any individuals, for security reasons.”

The seven people arrested range in age from mid 20s to late 40s, Irish police said. State broadcaster RTE reported that they were originally from Morocco and Yemen, but were all legally in Ireland.

They could be held for questioning without charge for up to seven days.

Police had been monitoring them for the past five months, RTE said, adding that 60 detectives were involved in raids Tuesday which resulted in the seizure of documents, computers and mobile phones.

18th 2007, alongside an editorial on freedom of expression and religion.

The protests in Sweden echoed the uproar caused in Denmark by the publication in September 2005 of 12 drawings focused on Islam, including one with the Prophet Muhammad with a turban in the shape of a bomb.

Muslims worldwide took to the streets in protest, angered both by the association of their religion with terrorism and by the showing of images of Muhammad, which many consider blasphemous in themselves.

In February 2008, Danish police said they had foiled a plot to murder the cartoonist behind the bomb drawing, Kurt Westergaard, while another attempt on his life was allegedly made by a Somali man in January.

Vilks has in the past dismissed the threats against him as “scare tactics” and, supported by the Swedish media, has insisted on the importance of publishing such material in defence of Sweden’s freedom of expression.

He even announced in 2007 that he had begun working on a musical based on the drawing called “Dogs”, involving Muhammad, Iranian President Mahmoud Ahmadinejad and Al-Qaeda.

He compared it to musicals such as “Cats”.