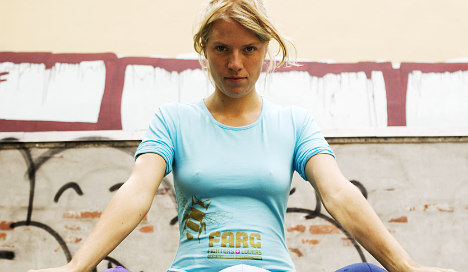 Denmark’s Supreme Court found in March 2009 that the company’s T-shirts violated Danish terror legislation as sales would support the PFLP in the Palestinian territories and the FARC in Colombia, both of which are included on the EU’s list of terrorist organisations.

All six convicted members of Fighters + Lovers received conditional prison sentences of between two and six months. In response, the firm decided to move its T-shirt operations to Sweden despite the fact that Sweden is also legally obliged to follow the EU list.

Since August 2009 the firm has been selling its T-shirts from Sweden and states on its homepage that proceeds from the collection are being forwarded to the FARC and the PFLP.

According to news agency TT, Swedish security police (Säpo) are aware of the firm’s presence in Sweden and are monitoring the situation but were unwilling to confirm what measures had been taken.

The firm operates a Swedish, Danish and Spanish web-shop to sell its T-shirts bearing logos with the groups’ names, as well as a Facebook site used to explain its mission in support of groups that it describes as “freedom fighters and political activists.”

The firm argues that terror legislation is out of all proportion.

“Showing solidarity to freedom fighters is not supporting terror,” the group writes, explaining that proceeds from T-shirt sales go to lawyers providing legal aid to Palestinians and Colombians incarcerated by Israeli and Colombian intelligence services.

F&L’s Danish director Michael Schølardt told Danish newspaper Politiken that since the court also fined the firm $165,000 proceeds are currently going to the Danish state and not the FARC nor the PFLP for the time being.