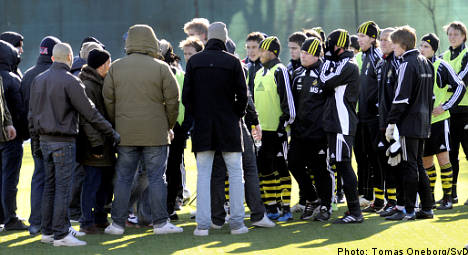 A firm favourite with Hammarby fans during his tenure at the club, Eguren became a hate figure for extreme supporter elements when he signed recently for arch rivals AIK after returning from a lengthy loan spell at Villareal in Spain.

On Tuesday irate hooligans moved their activities off various web forums and onto the training pitch at Skytteholms IP to put their message across to Eguren in person: “Traitor. We’re going to get you. This is just a warning — we’ll be back.”

Eguren was protected by his teammates, who formed a barrier around the player. The hooligans then left the training ground and had disappeared by the time police arrived at the scene.

“We’re in talks with AIK, who have primary responsibility as the employer. We’ll have to wait and see how the police will become involved in this,” police officer Hans Löfdahl told the public broadcaster.

With the Swedish football season set to kick off this weekend, Sebastián Eguren is hoping to boost his chances of selection to the Uruguayan World Cup squad having lost his place at the heart of the Villareal midfield.