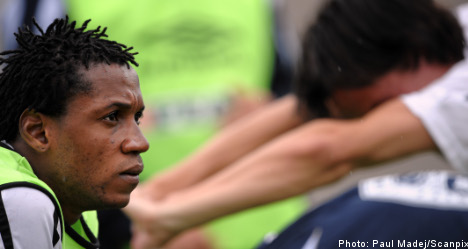 Bapupa, who joined Allsvenskan club Kalmar FF from Gefle IF in the autumn, was sentenced by the Appeals Court for lower Norrland which overturned a Gävle District Court decision to find him not guilty.

The 28-year-old, who has three caps for his country and played for Djurgården and Åtvidaberg before joining Gefle in 2006, stood accused of the rape of an 18-year-old woman in connection with celebrations over his transfer to Kalmar, Swedish champions in 2008.

Bapupa admitted to the court that he had had sex with the young woman in Gävle on November 14th 2009 after a party in an apartment in the northern Swedish town.

He maintained that the intercourse was consensual and the court judgement was based on a consideration over whether the woman was asleep at the time of the assault.

The appeals court threw out the district court decision and deemed that the woman was indeed asleep and thus could not have consented to the intercourse. The court did not deem the offence to be aggravated as no additional violence was involved.

The prosecutor had requested that Yannick Bapupa be deported after serving his sentence, but this request was rejected by the appeals court.