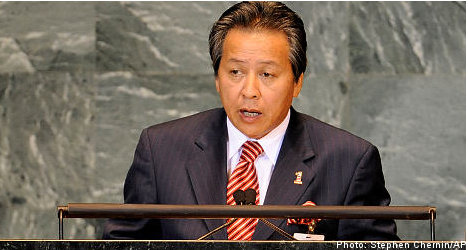 sensitivity of the Muslim world in the name of freedom of expression.”

“Such irresponsible acts are provocative and offensive in nature and hence

it is totally unacceptable,” he added.

“Malaysia wishes to request the Swedish government to take measures against

The country’s conservative Islamic party, PAS, announced plans to organize a demonstration and submit a formal letter of protest to the Swedish embassy over the re-printing of the caricature.

Sweden’s ambassador to Malaysia told the news agency TT that the demonstration is expected to happen at the end of the week, following Friday prayers.

The Malaysian foreign minister’s comments came at the end of a week which saw the arrest of seven people over an alleged plot to assassinate cartoonist Lars Vilks, who drew the caricature and who has a $100,000 bounty on his head from an Al-Qaeda-linked group. When the news of the plot broke, a number of Swedish newspapers reprinted the caricature, as a gesture of support for the cartoonist’s freedom of expression.

The original controversy started when a Swedish regional daily published Vilks’ satirical cartoon in 2007, prompting protests by local Muslims which later led to international protests. Egypt, Iran and Pakistan have all lodged formal complaints with the Swedish government.