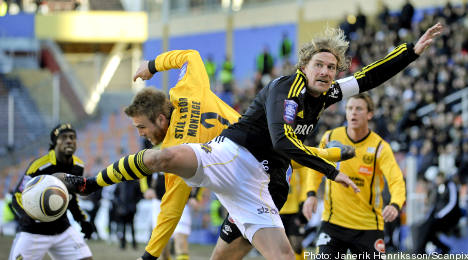 The Swedish Allsvenskan got off to an early start this weekend, due to this summer’s World Cup in South Africa – the decision was taken before Sweden’s failure to qualify became known.

Six matches were featured with AIK-Mjällby generating the most interest, pitting last year’s champions against the team from southern Sweden that had not featured in the top division for 24 years.

When the game was over the Blekinge outfit could be satisfied with a well-earned point, which was celebrated as if they had won the league.

AIK were without midfield general Dulee Johnson due to injury, and new signing Sebastián Eguren looked out of sorts at a sun-bathed Råsunda stadium on Sunday.

“Not good enough. Our offensive play was not at the required standard. It was quite close to being a Mjällby win today,” AIK coach Mikael Stahre told journalists after the game.

In Saturday’s season opener at Kalmar’s Fredriksskans arena, IFK Gothenburg declared their intent to go one step further this year with a resounding 0-3 win over the 2008 champions.

2009 golden ball winner and former Sunderland striker, Tobias Hysén, led the west coast team to victory scoring two goals. The Gothenburg rearguard was kept intact by the goalkeeping brilliance of Kim Christensen, who gained notoriety last season for his practice of moving the posts to reduce the size of the goal.

Kalmar, who have been widely seen as one of the favourites for this year’s Allsvenskan, offered surprisingly little resistance to the “blue and whites.”

“I just have to conclude that we were far too naive in our defensive play. We can only blame ourselves for letting in three easy goals, then Tobias Hysén did enormously well to claim his chances,” Kalmar coach Nanne Bergstrand said after the game.

Stockholm team Djurgården, who narrowly evaded the drop in 2009, fielded six debutants in their opener against Häcken on Sunday but despite dominating possession were left empty-handed after a Mattias Östberg header in the 62nd minute made it 2-1 to the Gothenburg team.

Helsingborg showed that there is life after Henrik Larsson with Mattias Lindström scoring the winner against Brommapöjkarna in the 90th minute in his first game after returning to his home town club.

Former Tottenham and Wigan left-back Erik Edman also featured in Helsingborg’s line up for the first time since 1999.

The weekend’s fifth game pitted Halmstads BK against Trelleborgs FF at Örjans Vall and ended in a 0-0 stalemate.

So the table on Monday shows IKF Gothenburg sitting pretty on the top of the pile, a position that many expect them to hold when the business end of the season is concluded in the autumn.