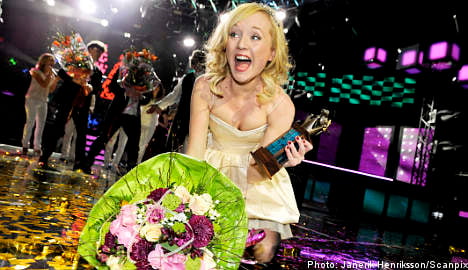 Some 3.9 million of Sweden’s 8.9 million-strong television-viewing public tuned in on Saturday evening for Melodifestivalen, the annual competition that decides the country’s entry to the Eurovision Song Contest.

With a team of presenters that included Dolph Lundgren, SVT topped figures for last year’s final by a cool 300,000 voters but was unable to surpass the all time best of 4.24 million recorded in 2006 when Carola sailed to victory.

The channel had already hit the couch potato jackpot the previous evening when 2 million people sat glued to their screens for the final of quiz show På Spåret (‘On The Track’). A thrilling finale to Kristian Luuk’s first season as host saw film critic Johanna Koljonen and poet Marcus Birro edge out broadcaster Hélène Benno and comedian Peter Apelgren with the last tug of the show’s trademark emergency brake.

SVT1’s winning streak stretched to the top six spots for the week before TV4 claimed a slice of the action with 1.66 million zapping their way to the celebrity glitz of Let’s Dance – Sweden’s equivalent of Strictly Come Dancing.

Weekly television viewing figures are collated by media measurement service MMS and are based on “people metre” reports from a representative panel of 1,300 Swedish households.