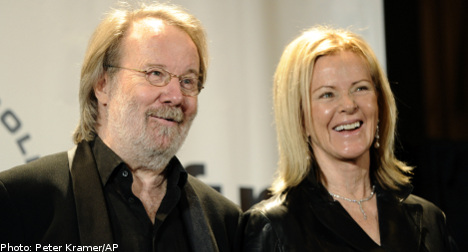 Seventies disco act Abba were joined by punk pioneers The Stooges, Jamaican reggae legend Jimmy Cliff and Britain’s Genesis and The Hollies in entering the rock star firmament after voting by more by more than 500 rock experts.

The inclusion of Abba raised the eyebrows of fans questioning whether the light pop group – for all its mammoth and enduring popularity – qualifies as a rock band.

But Rock and Roll Hall of Fame Foundation CEO Joel Peresman said the collection “represents a great cross-section of artists.”

The hall of fame is in Cleveland, Ohio. However the ceremony took place at New York’s Waldorf Astoria hotel in front of music industry bigs and celebrities including the actress Meryl Streep.

The Stooges’ Iggy Pop was on hand to pick up his award as were five of The Hollies, Genesis frontman Phil Collins, and Abba’s Benny Andersson and Anni-Frid Lyngstad.

Jimmy Cliff raised the roof with “The Harder They Come,” while the Stooges gave a thunderous performance that ended with guests jamming on stage alongside a shirtless Iggy Pop.

Benny Andersson played piano while Grammy winner Faith Hill made a guest appearance to sing Abba’s hit “The Winner Takes it All.”

But the Swedish super-group stopped short of a reunion, as did Genesis, whose original lead singer Peter Gabriel was away rehearsing for a solo tour.

Trey Anastasio, lead singer of Phish, introduced the “quiet rebels” of Genesis, saying they had entered rock ‘n roll legend and had been instrumental in forming his own career.

“When you’re a musician and you break new ground it resonates into the common consciousness,” Anastasio said.

The event was an Oscars-style black tie and tuxedo event, except this being the rock world many guests came without the tie or without the jacket, or either.

Iggy Pop joked to Rolling Stone magazine about the un-punk-like sartorial code, saying he owned a dinner jacket, but was hardly itching to put it on.

“I’ve got these things. I’m at the time of life where people sort of pick me up by the collar and exhibit me on various occasions,” he said.

True to his bad boy image he immediately made an obscene gesture – with both hands – at the audience from the podium, then removed his shirt to go on stage for a raucous rendition of “Search and Destroy.”

Musicians already in the hall of fame include Eric Clapton, Madonna, the Beatles, The Byrds and Simon and Garfunkel.

The only official requirement for candidacy is having released an album or record at least 25 years ago. Record sales are not considered important.

“It’s all very subjective. And all of the members of the nominating committee are very passionate about their suggestions,” the hall of fame’s website says.

Among those inducted Monday for behind the scenes contributions were manager David Geffen and songwriters Barry Mann and Cynthia Weil, Ellie Greenwich and Jeff Barry and Otis Blackwell.

Not everyone thought Abba – famous for many of the world’s most catchy tunes, including “Mama Mia” and “Dancing Queen” – deserved a slot ahead of more hardcore mega groups, such as Kiss, that are still waiting.

“Nominating Abba to the Rock and Roll Hall of Fame is sort of like saying the best dessert you’ve ever tasted was a hostess cupcake,” Time magazine complained.

But rock guests attending the evening were effusive in praising the Swedes.

Abba’s Andersson and Anni-Frid Lyngstad said they were happy that their 1970s act had had such longevity – and influence.

“Some of the records are still alive and people don’t remember what we looked like and that’s probably good,” Lyngstad laughed.

Phil Collins also welcomed the range of artists, saying “there seems to be more of a variety this year, from Abba, us, Jimmy Cliff: It seems to be a general cross section of music.”