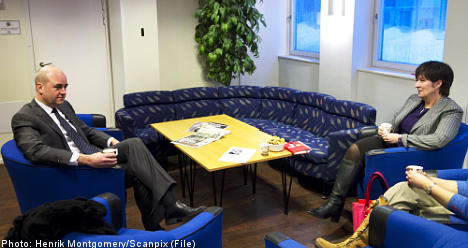 In an open letter to Prime Minister Fredrik Reinfeldt and Foreing Minister Carl Bildt, Sahlin claimed that “key ministers within the government are pushing different positions on Swedish cooperation with NATO.”

Sahlin, together with the party’s foreign affairs spokesperson Urban Ahlin, argued that she had repeatedly sought clarification on several important issues regarding neutral Sweden’s relationship with the military alliance.

“Should we really commit ourselves to NATO’s defence obligations regarding other countries in the Baltic region? Do we really want to see Swedish JAS Gripen fighter aircraft in NATO airspace defending NATO territory?” said Mona Sahlin to news agency TT.

“The government has not been open nor given any clear confirmation. I can see a slide towards a NATO membership which I do not want to happen,” she said.

The open letter was handed out to journalists in connection with a meeting of the Parliamentary Committee on Foreign Affairs on Monday. The purpose of the committee is to provide a forum for the government and the opposition to discuss important foreign affairs and security policy issues.

“If Mona Sahlin had any serious questions about this, then she should have addressed them to the committee, where the prime minister, defence minister and foreign minister were in attendance,” Carl Bildt told TT.