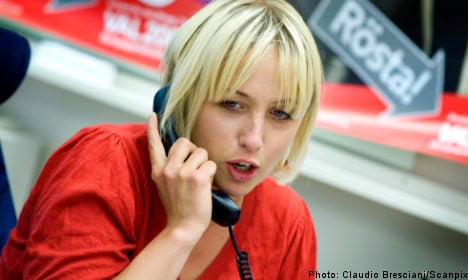 Over the past four years the word Alliansen has become synonymous with the government parties in Sweden. But since launching the political brand in August 2004 as Alliansen för Sverige (The Alliance for Sweden) the four parties had never thought to apply for copyright.

The youth league of the Social Democrat party discovered this fact and have themselves applied for ownership of the word and thus the brand.

If the Swedish Patent and Registration Office approves SSU’s application then the Alliance – consisting of the Moderates, Liberal Party (Folkpartiet), Centre Party and Christian Democrats – would be forced to buy back the brand, with the money raised donated to charity.

“I think it is nonsense. It is just this type of thing which makes people sceptical of politics,” Moderate communication chief Pär Henriksson told news agency TT.

Henriksson pointed out that opposition epithets such as De rödgröna (The red-greens), Vänsterpartiet (The Left Party) or Miljöpartiet de gröna (Green Party) are not registered either.

“We are not going to try to register them because they belong to the Social Democrats and their partners, and we think it is a shame that they set such a low standard already in the beginning of the election campaign.”

But Guteland responded that it is all part of election politics and reminded the Moderates of their attempts to poke fun of the Social Democrat ‘Alla ska med’ (Everyone should be included) slogan in 2006.

Henriksson does not believe that the SSU move will be approved as the brand is so closely associated with the government coalition.

SSU told news agency TT that even if successful they had no plans to refer to themselves as The Alliance.

The centre-right government launched their new logo on Monday. Despite SSU’s belated move they also revamped their name, dropping the reference to Sweden and will now refer to themselves simply as Alliansen.

“The move from Alliance for Sweden to The Alliance signifies a greater level of permanency,” Moderate Party spokesperson Per Schlingmann said on the unveiling of the pop-art inspired logo in their trademark colour of orange.