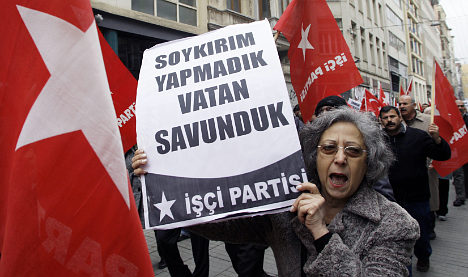 'We did not commit genocide, we defended the country', Istanbul, March 12

The left-green opposition voted unanimously in favour of the motion. As a result, the Turkish Social Democrats in Gothenburg called a meeting to consider their position on Saturday. The association’s board subsequently voted in favour of closure and has recommended that its 200 members leave the main Social Democrat party.

“We feel let down, misled and cast out of the party,” said the association’s secretary and former municipal councillor Mustafa Atik.

Atik confirmed that he had already begun talks with other parties regarding a cooperation. As the Social Democrats, Greens and Left Party all voted in favour of the motion, there remain only centre-right alternatives.

“This issue is so important that it gives us the energy to proceed with the election campaign, but against the Social Democrat party,” he said.

But the decision has been met with criticism from other Turkish groups in Sweden.

“The Gothenburg Turks are wrong. If we do not stay in the party how will we then influence the genocide question?” said Hasan Dölek, chair of the Turkish Association of Sweden and Stockholm city councillor, to news agency TT.

“We should work during the election, raise the turnout and vote red. At the next congress we can change the decision,” he said.

Sweden’s parliament moved last week to recognise as genocide the mass killings of Armenians and other ethnic groups – Chaldeans, Syrians, Assyrians and Pontian Greeks – in 1915 during the breakup of the Ottoman Empire, going against the government’s advice.

The Swedish parliament previously voted on the issue in 2008 when the Social Democrats voted against the motion, which was rejected (by 245 to 37). The Social Democrat parliamentary bloc changed its position after a vote among members at the party congress in 2009.