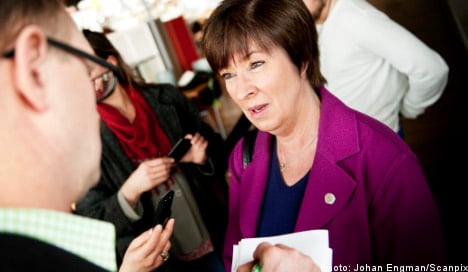 Speaking to the BBC on Tuesday, Erdogan cited figures showing that only 70,000 of the 170,000 Armenians living in Turkey were citizens of his country.

“If necessary I will tell the 100,000: okay, time to go back to your country. Why? They are not my citizens. I am not obliged to keep them in my country,” he said.

Erdogan’s comments followed non-binding resolutions by Sweden’s parliament and the US Congress to recognize as genocide the massacres of Armenians by Ottoman Turks in 1915.

“Perhaps this is more an expression of political jockeying in Turkey,” said Sahlin.

“I really hope he didn’t seriously mean that 100,000 people of Armenian extraction living in Turkey but lacking Turkish passports should be thrown out.”

“I am assuming the dialogue Reinfeldt says he is having with Erdogan does not only entail apologising for the Swedish parliament’s decision but also involves standing up for the human rights of Armenians living in Turkey,” she said.

The Social Democrat leader added that she had no regrets about the decision of the left-green opposition to push through the resolution last week with the help of four centre-right defectors.

Agneta Berliner was one of two Liberal Party MPs to ignore centre-right calls to reject the resolution.

“I don’t think this kind of threat should have any bearing on decisions by the Swedish parliament. In fact, actions such as this only serve to show how far Turkey still has to go before it is a full democracy that respects human rights,” she said.

Berliner dismissed suggestions that the Riksdag vote had played into the hands of forces in Turkey opposed to the democratic process.

“If that’s the case we can just roll over on every issue. I don’t think there’s any value for Turkey-friendly countries like Sweden in not expressing what we think,” she said.