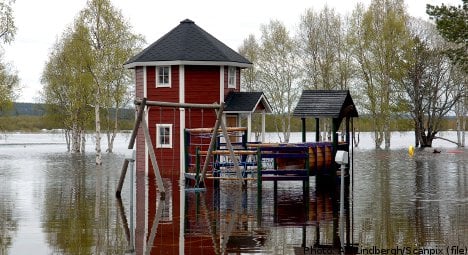 Many southerly areas of Sweden have registered extended periods of warmer weather this week with Stockholm enjoying temperatures as high as seven degrees Celsius.

The Civil Defence League (Civilförsvarsförbundet) in a report submitted to the defence ministry released on Thursday, has pledged the support of its members to ensure that Sweden is prepared for the worst.

“The Civil Defence League has noted fears over stronger spring floods than normal with an increased risk for flooding in parts of the country as a result. We have thus gone over what the league can offer at a national and local level.”

The league, which operates voluntary units in 135 of Sweden’s municipalities, has has also updated its recommendations over measures available to home owners on its website civil.se.

“It depends on the weather. If it gets warmer at the same time as it rains, then there will be a lot of water. But if it comes little by little then the system can handle it,” Landenmark told the newspaper.

According to the Swedish Meteorological Agency, SMHI’s latest forecast spring is starting to have second thoughts with the development for next week highly uncertain.

“In the north it will probably remain cold while in the south after a temporary dip it will rebound again but with changeable weather,” according to SMHI meteorologist Berndt Möller.

The agency concluded in an analysis on Thursday that spring had officially extended north to Halland – with several towns meeting the requirement of seven consecutive days of above-zero temperatures.