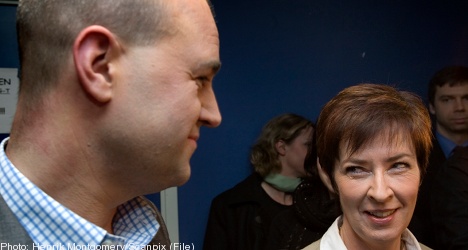 Fifty percent of people expressed faith in Reinfeldt in the latest Synovate poll, published in newspapers Dagens Nyheter and Sydsvenskan.

Wetterstrand’s popularity continues to rise, up seven percentage point to 45 percent. The 36-year-old has shared the Green Party leadership role with Peter Eriksson since 2002.

The Greens are making new ground together as voters expressed increased faith in Eriksson, up four percentage points to 26 percent.

He is now on a equal footing with Social Democrat and opposition leader Mona Sahlin who has fallen five percentage points since to also claim 26 percent of voter support.

The survey adds that 54 percent of Social Democrat supporters continue to back their party leader.

For Sahlin, the so-called balance of confidence – the number of voters with the strongest support minus the number with the lowest – now stands at just 11 percent.

Synovate analyst Nicklas Källebring told DN this is a “nightmare situation” for Sahlin.

“She is losing support among voters with just six months left to her first election as candidate for Prime Minister,” he said.

“And among the Social Democrat voters, support has reached an all time low and remains far weaker than other party leaders’ position among their own.”