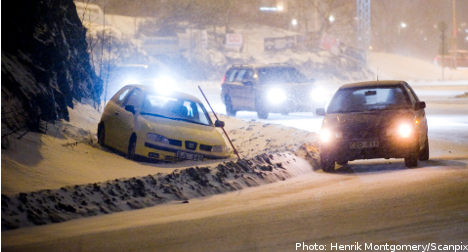 While roadsides were littered with ditched cars that had skidded off on the ice, no serious injuries were reported in the counties of Stockholm, Södermanland and Västmanland as the wintry weather returned eastern Sweden.

“A lot of vehicles skidded off but there were no significant injuries,” said Maud Johansson at Västmanland police to news agency TT.

A truck trailer overturned on the E18 two kilometres south of Sagån, coming to a stop across the road and causing a blockage in traffic heading for Västerås.

On the E18 west of Hallstammar a horse box overturned while carrying two horses. Vets were called and the horses were able to walk by themselves after they had been led out of the trailer.

Police in Södermanland were kept busy with cars that had skidded off the roads despite the low speeds attainable in the treacherous conditions.

“There have been quite a few cars skidding off the roads but there have been no serious injuries – just a lot of damaged cars. It is quite clearly very slippery,” Thomas Redlund at Södermanland police to TT.

While drivers in the Stockholm region escaped unscathed from the icy roads, four people were taken to hospital after several cars were involved in a collision on the E45 in Älvängen north of Gothenburg in western Sweden.

A further two people were seriously injured in a head on collision between a caravan and car on the E20 near Alingsås in western Sweden on Sunday.

Both the driver of the caravan and the car sustained life-threatening injuries with the former taken by helicopter ambulance to Sahlgrenska hospital in Gothenburg.

The Swedish meteorological agency, SMHI, has forecast rain in southern areas of Sweden on Monday, with more snow in northern areas.

Wednesday promises cold weather in most parts of the country with more snow and rain forecast towards the end of the week.