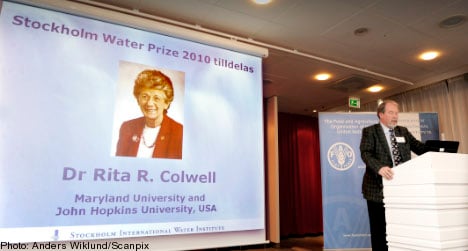 Colwell, 76, received the award for her “numerous seminal contributions towards solving the world’s water and water-related public health problems,” the jury of the Stockholm International Water Institute (SIWI) said.

Her work, especially on preventing the spread of cholera, “has established the basis for environmental and infectious disease risk assessment used around the world” and “is of the utmost global importance,” it added in a statement.

The 76-year-old professor at the University of Maryland and Johns Hopkins University’s Bloomberg School of Public Health was also honoured for being one of the first to study “the impact of climate change on the spread of disease,” SIWI scientific director Per-Arne Malmqvist told a gathering in Stockholm where the prize was announced.

Cholera is a waterborne disease that each year affects between three and five million people worldwide and causes an estimated 120,000 deaths, according to SIWI.

In the 1960s, Colwell discovered that the bacteria that causes cholera can enter a dormant stage and later revert to an infectious state, meaning even when there are no disease outbreaks, rivers, lakes and oceans can serve as reservoirs for the bacteria.

“These findings counteracted the conventional wisdom held that cholera (could only enter) the environment … due to release of sewage. As a result of her work, scientists are now able to link changes in the natural environment to the spread of disease,” SIWI said.

Colwell said on Monday she was thrilled at the award, which “validates a whole career of research on water safety and health, specifically in some of the controversial but ultimately proven to be correct (research): the prophecies concerning the distribution and transmission of cholera.”

Sweden’s King Carl XVI Gustaf will present Colwell with the $150,000 prize sum and a crystal sculpture on September 9 during the annual World Water Week in Stockholm.

The prize has been awarded annually since 1991 to people, institutes or organisations working to preserve water resources, improve public health and protect the cosystem.