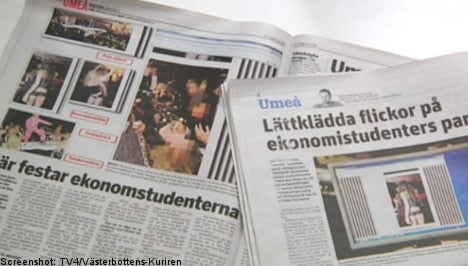 Girls posing in their underwear, a student licking chocolate sauce from a a girl’s body and pole dancing were just some of the vivid images that have emerged from a dinner party organized for male students at Umeå School of Business on Saturday evening, according to local newspaper Västerbottens Folkbladet.

The revelations over the party, organized and funded by HHUS – the student association at the business school – have prompted swift criticism from the university and its main student union organization.

“The party was unacceptable. We fully agree with the university’s condemnation of the event in that it displayed a sexist and seedy view of women,” said Nils Larsson at the Umeå University Student Union to The Local on Tuesday.

Larsson underlined that the university has battled to stamp out an old-fashioned view of student life.

“We have worked hard to get rid of sexist songs, for example. We are never fully protected from this sort of thing but it is becoming more unusual,” he said.

But according to Västerbottens Folkbladet a similar party was organized by HHUS in November last year, only on that occasion the roles were reversed.

Female students at the business school were then treated to a show featuring, among other things, young naked men dancing on stage with large cream-smothered “Falu” sausages clasped between their legs.

When asked if the lightly-clad women and men featured at the parties were hired for the occasion or whether they were fellow students at the university, Nils Larsson replied:

“I have no idea. I have asked HHUS to compile and submit a full report over the incident. We welcome clarification over who was responsible and what is being done to tighten up routines,” he said.

The Local spoke to HHUS chairperson Ludwig Sikström on Tuesday but was told that he was currently unavailable for comment.